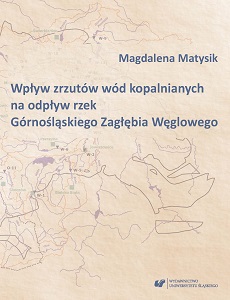 Author(s): Magdalena Matysik
Subject(s): Geography, Regional studies
Published by: Wydawnictwo Uniwersytetu Śląskiego
Keywords: Upper Silesian Coal Basin; mine water; runoff; regime river; human impact
Summary/Abstract: Mining activity is an important fact or that modifies the outflow of surface water in the area of the Upper Silesian Coal Basin. At the peak period of coal mining in the USCB, there were 83 points of discharging mine water from hard coal mines to the surface hydrographic network. Currently, in this area there are 64 discharge points: 23 in the Polish and 8 in the Czech part of the Odra basin, and 33 in the Vistula basin. The following rivers are the major ‘receivers’ of the discharged mine water: the Odra, the Ruda with the Nacyna, the Bierawka, the Kłodnica with the Bytomka, the Czarna Przemsza, the Pogoria, the Brynica, the Biała Przemsza with the Bobrek, the Przemsza, the Mleczna, the Gostynia and the Vistula. In the period of 1967–2013, on average 10.39 m3∙s–1 of the mine water coming from the drainage of the hard coal mines in the USCB was discharged to the rivers; 2.46 m3∙s–1 of which was discharged to the Odra, whereas 7.94 m3∙s–1 to the Vistula. The volume of the discharged mine water reached its maximum in the years of 1985–1988. The average volume of the discharged mine water at that time was 14.19 m3∙s–1; 11.03 m3∙s–1 of which was discharged to the Vistula basin, and – 3.16 m3∙s–1 to the Odra basin. The process of restructuring the mining industry initiated in 1989 resulted in a systematic reduction of the volume of the discharged mine water. The quantity of the discharged mine water decreased by 26% in relation to the peak period of the discharge in the years of 1977–1989. The catchment of the Bytomka is an exception, since there was an increase in the volume of the discharged mine water. The largest volume of the mine water was discharged into the Przemsza basin (6.66 m3∙s–1 on average). In the Odra basin, the greatest amount of the mine water was discharged to the Kłodnica. Its mean volume amounted to 1.05 m3∙s–1. The greatest portion of mine water in the flow was characteristic of the Brynica in Czeladź, where the average portion of mine water in SNQ was 61%, whereas in SSQ – 43%. Periodically, as much as 100% portion of mine water in the average annual low flow was recorded, i.e. in dry periods and during the maximum intake of water from ‘Kozłowa Góra’ reservoir, which is located above this section. The river flow consisted merely of mine water. A big portion of mine water is also characteristic of the Biała Przemsza, wherein mine water amounts to more than 50% of the average annual low flow, and accounts for 46% of the average annual flow. In the case of the Mleczna, the Gostynia, the Przemsza, the Pogoria, the Brynica (Szabelnia), the Bytomki and the Vistula (Pustynia), the volume of mine water in the average annual low and medium flows amounts to over 20%. The lowest portion of mine water, i.e. not exceeding 10% in SNQR and SQR, is characteristic of: the Vistula in Jawiszowice and Nowy Bieruń, the Czarna Przemsza in the cross section of the Radocha, and the Odra in the cross-sections of Krzyżanowice and Miedonia. The research into the impact of mine water on the runoff of the rivers carried out in the 1980s by, among others, A.T. Jankowski (1986, 1988), S. Czaja (1988, 1999), S. Czaja and A.T. Jankowski (1986, 1991b, 1992, 1993), J. Włodarczyk and L. Ośródka (1988), I. Hołda and L. Ośródka (1989), I. Hołda and M. Wojtylak (1991) revealed that the river flows increased as a result of the discharge of mine water into the local water system. In the flows of, among others, the Brynica, the Przemsza, the Gostynia, the Mleczna, the Bytomka, the Kłodnica and the Szotkówka generally growing trends were observed, especially in the 1970s. The process of stabilization took place in the next decade. The researchers observed that the impact of hydrometeorological factors on the runoff regime of these rivers was constantly decreasing while the portion of other waters in the outflow was increasing. What can illustrate the situation is the example of the Szotkówka, which was the largest receiver of other waters at that time – their portion in the runoff amounted to 66% (Włodarczyk, Ośródka, 1988; Hołda, Ośródka, 1989). The prognosis by A.T. Jankowski (1986) for an increase in the volume of mine water discharged to the Szotkówka turned out to be wrong, since as the result of the restructuring of the gas industry the volume of mine water decreased, and thus the flows of the Szotkówka ‘returned’ to the values from the period before their increase in the early 1970s. (fragment summary)