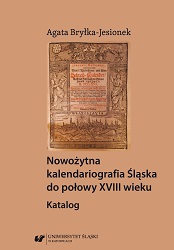 Nowożytna kalendariografia Śląska do połowy XVIII wieku. Katalog
Modern Calendariography of Silesia Up to the first half of the 18th century. Catalog

Author(s): Agata Bryłka-Jesionek
Subject(s): Political history, Social history, 16th Century, 17th Century, 18th Century
Published by: Wydawnictwo Uniwersytetu Śląskiego
Keywords: calendar; chronology; history of mentality in the modern era
Summary/Abstract: This work concerns the problem of modern Silesian calendariography. The choice of source material was determined by two factors: territorial and temporal. What is the subject matter of this work with reference to the territorial factor, are exclusively calendar publications issued in Silesian printing houses. They include the printing houses in the provinces of Wrocław, Legnica, Brzesko, Kłodzko, Nysa, Opava and Kożuchów. As to the chronological frame, it is determined by the date of the issue of the oldest Silesian calendar print that preserved to the present day. It is the year of 1562, when the Polish-language print entitled “Dzienne sprawy wedlie Niebieskich Biegow ná rok Panski. 1563 […]“ (“Daily matters according to Celestial Cycles for Anno Domini 1563 […]”), edited by Kacper Goski of Cracow. The final frames of this work are determined by the mid-eighteenth century, when significant changes of political character took place. They were a consequence of Silesia getting under Prussian rule resulting from the Peace Treaty of Berlin signed in 1742, which was reinforced three years later by the Peace Treaty in Dresden. This resulted in transformations in the field of legislation, which also had an impact on the calendar publishing market (the so-called Kalender- Patent issued by Frederick II). In total, 78 titles of calendar prints, which comprise 250 annuals, have been collected and cataloged. Despite the rudimentary state of preservation, it should be concluded that Silesian calendar publications were, to a large extent, periodic prints. They were issued mostly in German, occasionally also in Latin and Polish. Calendar publications were not only the effect of the work of their editors and publishers, they were also a specific manifestation of reading activity. Due to the notes made on their cards, their individuality and uniqueness were revealed. They became the trustees of the reader’s thoughts, and thus they played an important role in his/her life. Silesian calendar publications played an important role in the process of nowadays social communication. On their pages, since around the mid-seventeenth century, there had been presented texts reflecting the current state of knowledge in the fields of, among others, running a farm, geography, history, biology, medicine, chronology and astronomy. The aim of the editors was therefore not only to propagate knowledge of a practical nature, but also to expand the readers’ cognitive horizons and satisfy their inquisitiveness about the surrounding world. Reading the calendar printing was also supposed to provide entertainment. The texts published on the calendar pages give evidence of a considerable knowledge of the latest research results, since there were presented the views of well-known and respected, both ancient and modern, authorities. They were also often accompanied by the editors’ own reflections and observations. The calendar publications we are interested in may serve as a kind of measure of ideological changes within communities living in the area of Silesia. Therefore, they can be considered as a manifestation of the changes in the outlooks on life characteristic for a given epoch. The presence of astrological contents in calendar publications may be associated with manifestations of Renaissance thought, and the overabundance of them seems to be close to the ideas of the Baroque era. The face of this type of prints underwent far-reaching transformations in the 18th century, along with the movement of the Enlightenment, since at this time, alongside prints of astrological character, there were also those containing information about everyday life. In this way, calendar publications tried to meet the needs of the reader, thus becoming a kind of ‘mirror’ of social tendencies. They were also to perform the propaganda function, to integrate the circle of recipients around certain ideas and preferred values. The modern calendariography of Silesia is a manifestation of certain trends and fashions functioning within the contemporary society, which is indicated by a comparative analysis of Silesian calendar publications and the ones issued in other typographic centres. The thematic scope of calendariography of particular epochs may be evidence not only of ideological influences, but also of the then mentality within a given society. The texts placed in the calendar publications were, to some extent, to satisfy the needs of an average reader, which undoubtedly was vital to the commercial success of particular titles. These publications played an integrating role, as they were addressed to a wide range of recipients. Within their framework, the first manifestations of democracy and the formation of a civil society may be observed.