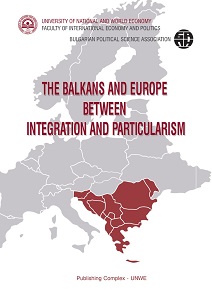 Author(s): Andrey Nonchev, Diana Yarosh, Hristo Draganov, Ivan-Petar Yovchev, Filip Petkov, Maria Bakalova, Anton Parvanov, Blaga Blagoeva, Daniela Pastarmadzhieva, Elisabeth Yoneva, Alexey Margoevski, Margarita Ivanova, Kalina Ishpekova-Bratanova, Plamen Ralchev, Gabriela Motoi, Ivo Barzov, Chaya Koleva, Albena Hinkova, Sonia Hinkova, Georgi Chankov, Ana Dimitrovska, Galya Mancheva, Elena Simeonova, Elena Zlateva, Lilia Markova, Denica Dimitrova, Mariana Stamova, Aleko Stoyanov, Dinko Dinkov, Monika Panayotova
Contributor(s): Maria Bakalova (Editor)
Subject(s): Politics / Political Sciences, Social Sciences, Economy, National Economy, Political Sciences, Sociology, Comparative politics, Nationalism Studies, Migration Studies, Globalization, Socio-Economic Research
Published by: Университет за национално и световно стопанство (УНСС)
Keywords: Balkans; Europe; integration; particularism
Summary/Abstract: This volume is a collection of papers presented at the International conference THE BALKANS AND EUROPE BETWEEN INTEGRATION AND PARTICULARISM: CHALLENGES AND PROSPECTS, organized by the Faculty of International Economics and Politics at UNWE and the Bulgarian Political Science Association and held in Sofia on October 25-26, 2018. The conference invited presentations on a number of issues such as: The integration potential of the EU (28-1) and the “enlargement fatigue”; Ethno-politics and integration: dimensions, patterns and results in the EU and Western Balkans; The Bulgaria’s Presidency and the EU prospects of the Western Balkans; “Fatigued from waiting”: the countries of the Western Balkans; Bilateral relations in the Balkans: between historical mythology and pragmatism; Connectivity and cooperation in the Balkans: projects and realities, etc.Around fifty scholars and researchers – both established and younger ones – participated in the scientific forum representing a number of universities and research institutions from several countries (Bulgaria, Romania, Croatia, Northern Macedonia, Serbia, Kosovo, Russia). What is worth noting is the high rate of participation of doctoral students, as well as the contribution of undergraduate students from universities in Bulgaria and from MGIMO in Russia. Notably, some of the participants took part in the conference in absentia by poster presentations. The present volume contains the texts of those of the conference participants who sent their presentations in written form. The volume is structured in three parts except for the keynote speeches, which are presented separately as they were delivered during the Conference. The first part encompasses research papers dealing with issues pertinent to the whole European Union and various aspects of the integration processes. The focus in the second part is on the Balkans in the context of the EU integration. The papers in the third part deal with the Western Balkans in particular, featuring also case-studies on individual countries.

IN MEMORIAM OF OUR COLLEAGUE AND FRIEND

The System of Own Resources within the EU Cohesion Process

Bilateral Issues in SEE under External Pressure: Risks for the European Prospects of the Western Balkans

The Balkan Countries in the Eurointegration Processes: Democracy Index (EIU 2017)

Political Culture of the Balkans: Historical Background and Contemporary Characteristics

The Balkans in the New Energy Architecture: Political and Economic Dynamism

Common Projects in the Energy Sector: The Balkans and the European Energy Union

Cooperation through Innovations: Opportunities for the Balkan Connectivity

Erdogan’s Reformed Turkey and the Future of Republic

The European Social Model in the Eurointegration of Romania and Bulgaria: Quality of Life in Terms of Policies and Outcomes

Italy and Bulgaria: Aspects and Dimensions of Bilateral Relations

Bulgaria’s Role as a Transit Point for Refugees

EU and US Leading Approaches to the Western Balkans: Compatibility and Differences

The Western Balkans: Arena of Rivalry among Global and Regional Actors

The Western Balkans in the EU Accession Process: PES(I) Assessment

Civic Participation and Elections in the Western Balkans

Croatia between Eurointegration and Nationalism

Judicial Reform and Process of Vetting in Albania: an Effective Project or an Unsuccessful Experiment

Republic of Macedonia: Ethno-Political Dilemmas and Challenges in the Eurointegration Processes

Republic of (Northern) Macedonia: from Struggle for Identity to Battle of Identities

Enlargement in Times of Crises: the EU Prospects of the Western Balkans