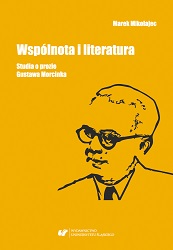 Author(s): Marek Mikołajec
Subject(s): Language and Literature Studies, Studies of Literature, Polish Literature
Published by: Wydawnictwo Uniwersytetu Śląskiego
Keywords: community; literature; ideologies; nationalism; regionalism;obsessions
Summary/Abstract: The main aim of this book is to analyse and interpret relations between community and literature in Morcinek’s works, for example, the ideology of implication, symbolic representations and delimitation of creative freedom. The second goal is to distinguish fantasies, traumas and obsession presented in Morcinek’s novels. Last but not least, Mikołajec describes the comparatistic project of the new community, which is based on regional universalism. The studies feature thematic arrangement. To reconsider the work of Gustaw Morcinek, the researcher engages methodologies, concepts and ideas proposed by Michel Foucault, Giorgio Agamben, Louis Althusser, Pierre Bourdieu, Eric Hobsbawm, Jacques Lacan, Peter Sloterdijk, Jacques Derrida, Walter Benjamin and Carlos Paris. Thus, Mikołajec confronts Morcinek’s works with ideas that are beyond the literary criticism created by the native context of interpretation of this naïve, folk and mining-district writer. In addition to the analysis, interpretations and comments on Morcinek’s prose, Mikołajec reaches for other artists, who help us to see the discussed issues and topics in a broader context. Community and Literature. Studies in the prose of Morcinek by Marek Mikołajec corresponds with the current research trend, whose main goal is to re-read canonical writers, who are generally recognized as well-known but in fact remain undiscovered.