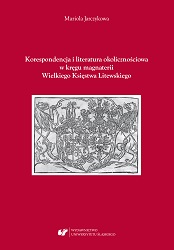 Author(s): Mariola Jarczykowa
Subject(s): Cultural history, Studies of Literature
Published by: Wydawnictwo Uniwersytetu Śląskiego
Keywords: Radziwiłłowie; Lew Sapieha; Krzysztof Dorohostajski
Summary/Abstract: In the present publication the author engages the problems associated with the correspondence and the occasional literature of the first half of the 17th century which have to do mainly with the families of Lithuanian magnates. The first part of the work presents the problems of the publishing of Old Polish epistolography and the readerly circulation of early letters. On the basis of the correspondence of the Radziwiłł, Sapieha families and of Krzysztof Dorohostajski Monwid (1562–1615) one described the familyrelated subject matter engaged in the letters, focusing on such important events as: birth, baptism, marriage, married life, as well as death and funerals. Gratulatory letters and letters of condolence were usually similar, which was a result of the application of conventional expressions, whereas the correspondence which accompanied wooing and the contraction of marriages manifested specific, untypical solutions and an individual approach of the senders. The chapter which presents the exchange of letters between brothers-inlaw who were in a feud is focused on the writings of Krzysztof Radziwiłł (1585–1640) and Lew Sapieha (1557–1633), who commented upon the decision of the king associate with the appointment of the function of the grand hetman of Lithuania. By making accusations, the correspondents rejoined and discussed their family relations. The claims which were laid in reference to the question of the inheritance of the brother of his second wife Zofia were featured immediately in Krzysztof Dorohostajski’s letters to Janusz (1579–1620) and to Krzysztof Radziwiłł. A different nature is manifested by carefully composed Latin letters of Janusz Radziwiłł (1612–1655) and Maciej Kazimierz Sarbiewski, which presented the relations between the Calvinist and the Jesuit. Piotr Kochlewski’s correspondence (d. 1646), a representative of Krzysztof Radziwiłł in Kiejdany, features detailed information about various aspects of the life of the city. The second part of the work discusses occasional works devoted to Lithuanian magnates. The considerations, which are preceded by remarks about the editorship of occasional literature, focus on the verse commentaries devoted to the candidates to the Polish throne during the period of the third interregnum. To mark this occasion, an oration was written by Krzysztof Radziwiłł Piorun (1547–1603), and the verse “Lament…” was written by Krzysztof Dorohostajski. Monwid was described as a valiant soldier, who made his name in the assault on Smoleńsk in 1611. Many occasional texts were written in connection to births, marriage ceremonies and the funerals of magnates; they feature the genological form of a lament, a bucolic, a genethliacon, an epithalamium, an epitaph etc. The poems which were written after Krzysztof Radziwiłł’s death and which heretofore remained unknown were found in the manuscripts which are currently located in Lwów (Bavorovianum) and in the Central Library in Rotterdam. The Lithuanian magnates were also presented in a negative light. It mainly the Radziwiłł who were lampooned – Krzysztof, as the alleged instigator of the Wilno riot in 1639, and his son Janusz, as a traitor during the Swedish deluge and the Moscow raid.