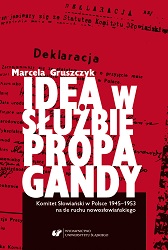 Idea w służbie propagandy. Komitet Słowiański w Polsce 1945–1953 na tle ruchu nowosłowiańskiego
An idea subject to the purposes of propaganda. The Slavic Committee in Poland in 1945–1953 in the context of the neo‑Slavic movement

Author(s): Marcela Gruszczyk
Subject(s): Recent History (1900 till today), Cold-War History
Published by: Wydawnictwo Uniwersytetu Śląskiego
Summary/Abstract: After the Second World War, the cooperation of Slavic people was treated by the communist authorities as the basic determinant of the internal and external policy of the country. It was seen as a guarantee of peace and safety in post‑war Europe. Moreover, according to the recommendations of the Soviet Union, it was supposed to serve the purpose of the Sovietization of the society. Additionally, it was supposed to convince the society about the value of an alliance with the Soviet Union in the eyes of the Slavic nations. The Slavic Committee was the main organization responsible for promoting the idea of Slavic unity. Since it had acquired mass appeal, its activities were supported by Polish‑ Slavic Friendship Societies – mainly by the Polish‑ Soviet Friendship Society. Missing and incomplete data in archival materials makes it impossible to identify the father of the idea of establishing the Slavic Committee in Poland. The only thing that is clear is the fact that the work on its establishment began in June 1945. With an initial focus on national structures, the work was initiated by Warsaw intellectuals, and inspired by communist authorities. Almost at the same time in Kraków, the centre of Slavic studies in Poland, a group of scholars associated with a Jagiellonian University professor – Henryk Batowski – took steps which led to the creation of the first local branch of the association. During his visit in Poland in July 1945, Aleksandr Gundorov, a Soviet activist, recommended the creation of the Polish Committee. He was invited by the Provisional Government of National Unity to take part in the commemoration of the 535th (five hundred thirty fifth) anniversary of the Battle of Grunwald. The most intense period of the operations of the Slavic Committee was between 1945 and 1949, when the committee conducted cultural and educational activities on a great scale. Special attention was accorded to conducting and celebrating public holidays, and historical anniversaries important for Slavs. The committee also organized – with great attention to detail – exhibitions, artistic performances, radio shows, and lectures promoting other Slavic countries. During that time the committee had been heavily involved in the Sorb issue. The involvement was motivated by a broad attention to the problem of the Polish society, and the nation’s strong support in reference to the requirements of the Sorbs. Apart from the element of the strengthening of Slavic unity, it was also a great moment to highlight and explain the defeat of the Third Reich. It is worthwhile to mention that the Committee had its own press organ – Życie Słowiańskie (Eng. Slavic Life) magazine. The monthly appeared between 1946 and 1953. a total of 84 issues were edited and published. An issue contained about 60 pages. Henryk Batowski was the first editor of the magazine. He held this function between 1946 and 1951. Jerzy Woźnicki was the second and, at the same time, the last edit‑ The magazine consisted of two parts. The first one contained articles about the history of Slavic countries (for example, the Soviet Union, the Czech Republic, Bulgaria and Yugoslavia). The content published in the second part was related to Poland. It had the form of short information materials, grouped into regular sections. They included: Kronika polityczna, kulturalna i gospodarcza (Eng. The Political, Cultural and Economic Chronicle) and Przegląd książek i czasopism słowiańskich (Eng. An Overview of Slavic Books and Magazines). Reports on the current activity of the Committee were also printed. Sometimes sports news and information on arts was provided. Texts were mainly written by the members of the Committee management. Officially, the editorial team of the magazine was supposed to make sure that the annual number of published materials on individual Slavic countries was similar. However, most of the published texts were in fact related to the Soviet Union and the Polish‑ Russian cultural cooperation. These were typical propaganda articles, full of lofty slogans praising the alliance with the Soviet Union. In the early 1950s the international cultural exchange has been severely limited. Until that point these activities were in the scope of the Slavic Committee. However, mainly as a result of a Soviet‑Yugoslav conflict they were shifted to the Committee of International Cultural Collaboration (established in June 1950). The Soviet‑Yugoslav conflict ruined the conception of Slavic unity.