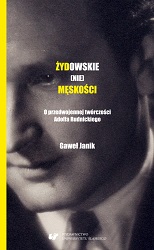 Author(s): Gaweł Janik
Subject(s): Language and Literature Studies, Jewish studies, Studies of Literature, History of Judaism, Polish Literature
Published by: Wydawnictwo Uniwersytetu Śląskiego
Keywords: Adolf Rudnicki; inter-war literary output; Jews;masculinity;
Summary/Abstract: The monograph is meant as a kind of a complete guide to pre‑war writings of Adolf Rudnicki. The author has taken into consideration all literary works written by Rudnicki that were published at that time, including both books and short stories published in the press, as well as fragments of a drama which has never been published in full. The present work begins with a chapter entitled “From the history of reception”, in which the author reconstructs pre‑war literary criticism of the works written by Rudnicki that were published at that time. On the basis of almost forty reviews, a broad picture has been created that shows how the writing of Rudnicki was interpreted and evaluated in the period under consideration. The aim of the author has been to confront the opinions of the researchers who claim that Rudnicki became critics’ favourite from the very moment of his literary debut, with source texts, and thus with original critical reviews published in pre‑war press. The analysis of the reception has allowed to throw doubt on the frequently repeated thesis whereby Rudnicki enjoyed a remarkable favour of reviewers. Chapter two discusses the idea of “Jewishness” of the pre‑war works of the writer. It demonstrates a long way that the author came, starting with his early texts, in which the Jewish themes are not taken up at all, or they are not explicit on the surface of the texts, up to a symbolic return to the reality of shtetl in the novel Lato [Summer]. Also, the aim of the author has been to look upon transformations in the writer’s worldview. Initially, his attitude was clearly assimilative. Before the outbreak of the Second World War, in turn, he took the side of the critics of assimilation. It has also become necessary to reconstruct the writer’s biography with a special emphasis on the orthodox family in which he was raised. Drawing on the category offered for reflection upon the Polish‑Jewish relations in 1980s by Artur Sandauer, the author of the present study has attempted to present Rudnicki as a writer‑allosemite. The third chapter is the author’s attempt to read Rudnicki’s pre‑war prose from the perspective of research on masculinity. The specificity of Rudnicki’s works, i.e. the world of men presented in them, from which women were almost completely excluded, has not been noticed for many years, and consequently has not been properly described. What is more, masculinity in Rudnicki’s texts often turns out to be exceptionally non‑masculine, effeminate, as well as homosexual. Thus, the present work becomes an attempt to read, in German Ritz’s words, the “secret signs” present in the writer’s inter‑war literary output, which makes it possible to read it as also homosexual, and thus to include Rudnicki among such writers such as Jarosław Iwaszkiewicz or Witold Gombrowicz.