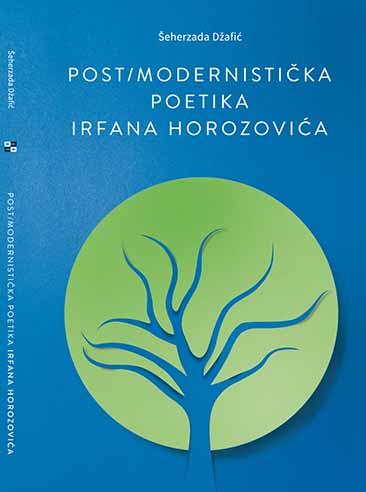 Author(s): Šeherzada Džafić
Subject(s): Social Sciences, Language and Literature Studies, Sociology, Bosnian Literature, Theory of Literature
Published by: SAMOUPRAVA - Centar za kulturu, umjetnost i društvo
Keywords: Bosnian literature; Irfan Horozović; postmodernism; spatial turn; fiction; fantastic; (between) space; place; identity;
Summary/Abstract: Irfan Horozović is an example of a writer who is created out of territorial, linguistic, ideological and existential framework of the home environment has become the spotlight of recent theoretical considerations that it emphasizes his identity / diversity. The ultimate goal of this book is to show in the case of Irfan Horozović how specific feature of Bosnian literature shares their writers with other literatures is in fact not a disadvantage but an advantage and with that it gets the diversity and interculturalism (Džafić, 2015), openness and specifics, which are all important characteristics of modern literature.Taking into account the spatial turn as a newer model in the study of literature, this book is basically moving in two directions, thus establishing two main hypothesis. The first hypothesis relates to the identity of the individual – in what way the identity is realized and / or built into contact with otherness (others) to point to the (lack of) strength of that identity (his weakening or strengthening), but also what is the role of the spatial movement during the process. The second hypothesis concerns the intercultural literature - in what way the area as a category within the literary work establishes and strenghtens intercultural relationships of the individual and the collective. By consideration of space in Horozović's work is observed how his protagonists with constant recognition and search for their own starting points set up specific intercultural topographies. At the same time the process of recognition is marked by areas in which the protagonists move on acquiring and conquering/adopting different identities. Those spaces are based on specific (o)positions: inside/outside, below/above, indoor/outdoor, private/public, here/there and separate topos: city/province, street/room, house/town, pub/inn, basement/ attic. Referring to the real spaces, spaces in this paper are divided into the spaces of faction, fiction and fantasy, which are the main chapters of the paper. Faction areas are related to the actual motion of the author in which process the cities of Banja Luka as the first and main topos and Zagreb as a study and a central topos are largely covered where the space between ensures Horozović to be placed in intercultural context. On the other hand, the spaces of fiction and fantasy are the spaces within the works in which the protagonists exist at the level of personal search for themselves in which movement these spaces become the point of convergence of deeper, essential connections of past and present, isolated spaces, and sometimes non-spaces and unreachable places, that eventually be turned into sentimental sanctuary places. Irfan Horozovic, as an author who has created within the two literatures, is tied to two (or more) topos, settled into the space of the text by statements such as the one that "belongs to the language he writes” while giving readers the freedom to place him in their personal receptive space.