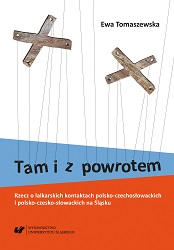 Author(s): Ewa Tomaszewska
Subject(s): Theatre, Dance, Performing Arts, Fine Arts / Performing Arts
Published by: Wydawnictwo Uniwersytetu Śląskiego
Keywords: puppet theater;
Summary/Abstract: The book is an attempt to document Polish-Czechoslovak, as well as Polish, Czech and Slovak puppetry collaboration. It also provides an analysis of the phenomenon of mutual influence between these theaters. The inspiration to write this book comes from a visit of the Czech and Slovak artists to the Polish puppetry theaters, which is particularly conspicuous in the Silesia region. Unlike the Polish theater, the Czech and Slovak puppetry tradition is long and rich, which resulted in the situation that Czechoslovak puppetry took root in the tradition that was enhanced by the imposed doctrines of social realism, whereas Polish puppet theater was shaping more freely with no encumbrance. Thus formed Polish style which made use of visual texture and various means of expression that transcended the traditional idea of a puppet, and experimenting with the power of expression by using a puppet along with a real human actor, proved inspiring to the neighboring country of Czechoslovakia. At the turn of the 1970s and 1980s Czech and Slovak artists commenced appearing on Polish puppet stages. With the advent of the 1980s these visits turned into a close international collaboration. Among the most active artists on the Silesian scene were: from Slovakia, Marián Pecko and his team (Eva Farkašová, Jan Zavarský, Pavol Andraško, Robert Mankovecký); from the Czech theater, Matěj Kopecký, Miroslav Vildman, Karel Brožek, Petr Nosálek, who brought their collaborators (Alois Tománek, Petr Litvík, Tomáš Volkmer, Pavel Hubička, Pavel Helebrand, Nikos Engonidis). In the 1990s Polish puppet theaters boasted guests from Zaolzie; among them were Rudolf Chowaniok, Paweł Żywczok, Halina Szkopkowa, and Janusz Klimsza. At the same time Czech artists, such as Karel Brožek, Petr Nosálek, Jakub Krofta, became artistic directors of the puppet theaters in Katowice and Wrocław, which was an unprecedented phenomenon. Apart from the above-mentioned artists, there are others working for puppet theatres in Silesia, as well as in other regions of Poland, namely, Norbert Bodnár, Simona Chalupová-Pěničková, Hana Cigánová, Karel Fiszer, Vacláv Kábrt, Pavel Kalfus, Josef Krofta, Lukáš Kuchinka, František Lipták, Zdeněk Miczko, Jan Polívka, Ondrej Spišák, Libor Štumpf, Povel Uher, Marek Zákostelecký. These artists represent older generation as well as younger ones, who completed their studies at the faculty of Alternative Art and Puppetry in Praha. This particular situation did not remain unnoticed as Hanna Baltyn claims that the Czech and the Slovak rule, and Henryk Jurkowski asks whether this means an invasion. Therefore, questions arise as to what extent the Czech and Slovak presence in the Polish puppetry is conditioned by the opening of borders, community of cultural references, and weakening position of the Polish theater, or whether it is the result of permanent cultural fluctuations. This publication seeks answers to these questions. In addition, it depicts most significant performances staged in Silesian theaters in 1980–2010 by artists from Czech and Slovakia.