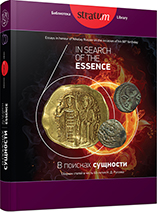 В поисках сущности
In Search of the Essence

Essays in honour of Nicolai Russev. on the occasion of his 60th birthday

Contributor(s): Mark E. Tkachuk (Editor), Georgi Atanasov (Editor)
Subject(s): History, Archaeology, Cultural history, History of ideas, Ancient World, Middle Ages, 6th to 12th Centuries, 13th to 14th Centuries, 17th Century, Scientific Life
Published by: Издательский дом Stratum, Университет «Высшая антропологическая школа»
Keywords: history; archaeology; Middle Ages; numismatic; epigraphy; Bulgarian studies; Moldova; Golden Horde;
Summary/Abstract: Elsewhere, not in Moldova, Nikolai D. Russev would have been long ago recognized an outstanding contemporary, a kind of Jacques Le Goff from the Balkans, a kind of Nicolae Iorga from the Danube and Dniester, an active and cheerful chronicler, keeper and — in a certain sense — an eyewitness of the region’s five hundred years of history. The kind of history nobody else can tell here, unfortunately. The kind of history he is writing every day, having hardly anyone to tell it to. The historical activity is disappearing here. Storytellers are not wanted. No one is tempted by the lessons of the past. Mistakes are not learnt from, personalities are not respected. Moldova, this “borderland between worlds and times”, turns into an intellectual and human desert.

«Гораздо сложнее было с живыми…»: История одного поселка на границе тектонических сдвигов цивилизаций
(“Those alive were much harder to deal with…”: history of a settlement on the border between tectonic shifts of civilizations)