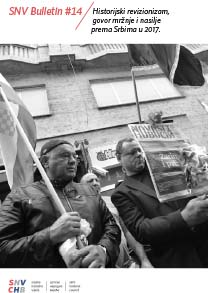 Author(s): Tamara Opačić
Subject(s): Politics and communication, Studies in violence and power, Victimology, Historical revisionism, Inter-Ethnic Relations, Ethnic Minorities Studies, Politics of History/Memory, Politics and Identity, Identity of Collectives, Peace and Conflict Studies
Published by: Srpsko narodno vijeće, Arhiv Srba u Hrvatskoj
Keywords: historical revisionism; Hate Speech; violence against Serbs;
Summary/Abstract: "A group of about three to four people in their 40s approached us. They were visibly inebriated and started swearing at 'our Chetnik mother', asking 'how come we were not ashamed to come to Zagreb'. My wife and I looked at each other and remained silent. What were we to do, we were here with small children? We waited for their rampage to end but it went on for a while and then they left with the message that they would take care of us and the children, should we ever return", Dušan Kovačević, the director of the Novi Sad music festival Exit, said during his visit to Zagreb. The incident occurred in mid-February 2017, the same month that stickers appeared on the streets of Vukovar with the invitation to hang Serbs, and that members of the extreme right party Autochthonous – Croatian Party of Rights (A-HSP) marched through the Croatian capital dressed in black. Last February will also be remembered as a month when an Ustasha graffiti appeared on the Orthodox church of Holy Trinity in Bjelovar, a protected cultural monument. Also in February, the Social Democratic Party (SDP) MP Milanka Opačić, received police protection because of the photomontage inspired by her Serb nationality, published by the portal Dnevno.hr. Dalmatia was no exception to this trend. At the end of February, organisers of a carnival in Kaštele near Split, torched before hundreds of spectators and effigy of Milorad Pupovac, the president of the Serb National Council (SNC) and of the Independent Democratic Serb Party (SDSS).