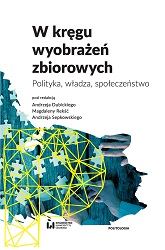 Contributor(s): Andrzej Dubicki (Editor), Magdalena Rekść (Editor), Andrzej Sepkowski (Editor)
Subject(s): Politics / Political Sciences, Politics, History, Philosophy, Social Sciences, Economy, Political Philosophy, Social Philosophy, Sociology, Political history, Social history, Socio-Economic Research
Published by: Wydawnictwo Uniwersytetu Łódzkiego
Keywords: political myths;stereotypes;collective memory;collective identity;collective representations;utopias
Summary/Abstract: This work is a collection of articles written by representatives of various social sciences whose filed of interest lies within such categories as: collective representations, collective memory, collective identity, myths and stereotypes. Politics should be seen as the common denominator for this broad spectrum of issues raised in this publication as it lies in the centre of the attention of each and every author who contributed to this work. The variety of interests and research orientations corresponds with today’s postulates of sharing interdisciplinary reflections on complex and complicated issues – the issues discussed in this monograph should be considered as such. The first texts in this work are strictly theoretical and deal with: an attempt to categorize the collective representations; an analyses of the the anthroposphere of our days and the return of the “enlightened” man, but not in the understanding of Immanuel Kant; the approximation of the contents and forms of utopia – the utopia of thought and the utopia of deed, which seem to begin to reappear in the political thought of some circles. The majority of texts found in this work refers to the case study, analyses the myths, stereotypes, collective memory and the collective identity of different societies: Polish, Russian, Ukrainian, Czech, Chinese, North Korean and that of former Yugoslavia. The originality of this work is strengthened by the studies devoted to the rare research ideas such as the importance of myths in sport’s diplomacy. It seems that such a broad spectrum of themes focused on the topic issues creates an opportunity for a deeper understanding of the collective spaces.

Podmiotowość istoty ludzkiej w procesie rozwoju i transformacji – refleksja historiozoficzna
(The Subjectivity of the Human Being in the Process of Development and Transformation – a Historiosophical Reflection.)

Badania nad stereotypem Chińczyka, czyli jak Polacy postrzegają przedstawicieli Państwa Środka
(Research on the Stereotype of a Chinese or How Chinese are Seen by Poles)