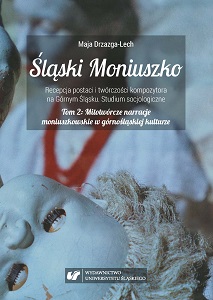 Author(s): Maja Drzazga-Lech
Subject(s): Social Sciences, Sociology, Nationalism Studies, Sociology of Culture, Identity of Collectives
Published by: Wydawnictwo Uniwersytetu Śląskiego
Keywords: Polishness; Upper Silesianness; cultural identity; cultural artefact; symbol
Summary/Abstract: The book which is devoted to the mythopoeic Moniuszko narratives featured in Upper Silesian culture is the second and the final volume of the publication entitled Silesian Moniuszko. The reception of the figure and the output of the composer in Upper Silesia. A sociological study, which is based in its entirety on the PhD dissertation of the author entitled The construction of national identity through music. The reception of the figure and the output of Stanisław Moniuszko in Upper Silesia in the 20th century. A sociological study, which was defended at the Department of Social Sciences of the University of Silesia in 2015.The book presents the results of an analysis associated with the process of the assimilation of the figure and the selected works of Stanisław Moniuszko, approached to as a cultural artefact peculiar to the intersubjective space of Polish cultural identity, to the Upper Silesian culture. What is significant is the fact that along with the transformations of Upper Silesianness which occurred in the 20th century, and especially after the Second World War, also the content which was attributed by the activists of Silesian associated amateur circles of songsters and the creators of the reception of the stage works of the composer presented in Silesia to Stanisław Moniuszko changed. The post-war Upper Silesian reception of Moniuszko formed by the authors of press statements which described the activity of the Silesian amateur choirs and instrumental ensembles – the heirs to the Association of Silesian Circles of Singers – manifested features of double-track mythologisation. On the one hand, sometimes one ascribed to Moniuszko the role of a precursor of Polish socialism, which was consistent with the agenda of the socialist Polish state. On the other hand, one maintained the narrative which rendered the figure of the composer a symbol of the Polishness of Upper Silesia, created by the Association of Silesian Circles of Songsters in the inter-war period. A particularly interesting fact is that within the framework of the activities of this amateur musical association realised after 1989 one disseminated a new Moniuszko narrative – a narrative about the friend of the Silesian team of songsters. This is interpreted as an indicator of a change of the relation which gradually came into being between Silesian culture and the cultures of other nationalities which influenced Silesianness. In the modern documents signed by the Silesian Association of Choirs and Orchestras – the heir to the Association f Silesian Circles of Songsters – Silesianness is presented not only as a value but also as a subjective space, which contains references to other nationalities, including references to Polishness.An analysis of the reception of the figure of Stanisław Moniuszko and his stage works, especially his first opera, Halka, created on the basis of a narrative which refers, respectively to: the performances of Warsaw artists conducted by Emil Młynarski in the plebiscite area in 1920, the activities of the opera stage in Teatr Polski im. Stanisława Wyspiańskiego in Katowice in 1922–1931, guest performances of Moniuszko’s works in Teatr Polski in Katowice in 1932–1939, the activities of Opera Śląska in 1945–2010, also revealed that there is a Moniuszko narrative, peculiar to this region, which refers to the first opera of the composer – “the Silesian Halka”. Another interesting thing has to do with the evolution of the content ascribed to this opera by the creators of the instances of reception which refer to the particular performance of Moniuszko’s work staged in Opera Śląski in Bytom. On the one hand, one constantly mentions the events which constitute the “Silesian heritage” of this work, on the other hand, one ascribes to the author of this work the fulfilment of social roles, whose relevance is dictated by the context of reception: a national artist in Polish music, a precursor of Polish socialism or the creator of works of universal significance.