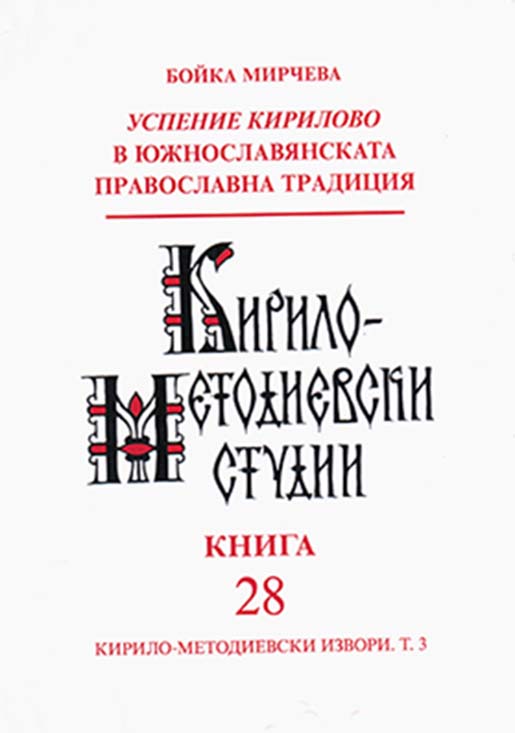 Author(s): Boyka Mircheva
Subject(s): History, Language studies, Language and Literature Studies, Cultural history, Library and Information Science, Archiving, Cataloguing, Studies of Literature, Middle Ages
ISSN: 0205-2253
Published by: Кирило-Методиевски научен център при Българска академия на науките
Keywords: Assumption of Cyril; copies; Second Bulgarian Kingdom; Slavic Cyrillo-Methodian sources; Tarnovo hagiographical cycle
Summary/Abstract: Since the moment of its discovery, the Short Vita of Cyril (Assumption of Cyril) has been incorporated in the Slavic Cyrillo-Methodian sources on a regular basis. Scholars exploring the work of Cyril and Methodius and their disciples have been using this text as a complement to their main research material. The text of Assumption of Cyril is significantly less explored in comparison to the rest of the Slavic Cyrillo-Methodian sources and so far there hasn’t been a complete edition of this important work based on all extant copies. This study seeks to collect, publish and explore all known copies of Assumption of Cyril contained in different types of codices. This, on the other hand, calls for examining the reasons for its inclusion in the manuscripts, in which it functions, thus forming a complete picture of the textual history of Assumption of Cyril in the context of the literary and cultural history of the Balkans. The drawn textological parallels don’t confirm the hypothesis of the text’s archaic nature. The dependence of the text on Vita Methodii suggested by some authors is not confirmed by the textological parallels either. The loci communes between the two works result from the influence of other, later Cyrillo-Methodian sources. It is possible that the compiler of Assumption of Cyril hadn’t known the text of Vita Methodii, at least he never used it. One of the reasons may be rooted in the fact that Vita Methodii was not as widely spread as Vita Cyrilli; moreover, no South-Slavic copies of this work have survived. The text of Assumption of Cyril bears closest similarities to its contemporaneous Assumption of Methodius, to which it is connected by numerous and close textological parallels. The fragment in BAS23 features the authentic text of Assumption of Cyril where the praise to the Bulgarian Orthodox Kingdom is preserved in the same form as it is found in two other works of the Tarnovo pre-Euthymian school: in the Life of Patriarch Joachim I and in Assumption of Methodius. The distinctive features of the work lead to the conclusion that the creation of the text of Assumption of Cyril should be related to the period of the restoration of the Second Bulgarian Kingdom and the rise of the Bulgarian Patriarchate in 1235, as part of the Tarnovo hagiographical cycle in praise of Bulgarian saints. Especially important are the copies of Moldovan origin of Assumption of Cyril, which account for half of the extant copies. There the praise to the Bulgarian Orthodox Kingdom has been reworked into a blessing to all orthodox kingdoms. The earliest witness of this textual tradition is preserved in the Collection of Gavriil Uric of 1439. It appears that political reasons have been behind the composition of the text, that it has been connected with works of the same period, in line with the same political and religious trend, as an outspoken advocacy of Bulgarian statehood and Orthodoxy. As testified by the copies, the text’s political line was used in its further life. Assumption of Cyril entered Romanian literature with the collections structured according to the Jerusalem Typikon and became one of the emblems of the political and religious identity in Moldova at the turn of the seventeenth century, remaining largely connected with the era of the Moldovan Metropolitan Anastasius Crimca. The book includes an edition of all extant copies: deciphered text and photocopies of the manuscripts.