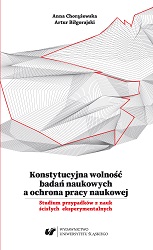 Author(s): Anna Chorążewska, Artur Biłgorajski
Subject(s): Law, Constitution, Jurisprudence, Constitutional Law, Civil Law, Public Law
Published by: Wydawnictwo Uniwersytetu Śląskiego
Keywords: principle; freedom; freedom of scholarly research; the principles of the limiting of the constitutional freedoms and rights; the concept of scholarly research; copyright; intellectual property law; the protection of intellectual property
Summary/Abstract: In the context of the Polish constitution, the monograph analyses the framework of the freedom of engaging and conducting research (Art. 73). By formulating this freedom, the constitutional legislator at the same time sanctioned the principle of equal legal protection of the scholarly output of the researcher, and that regardless of the dissimilarity of the subject and the nature of research work in various departments of knowledge/scholarship (Art. 32 in reference to Art. 64 Para. 1 and 2). However, the realisation of the indicated constitutional maxim at the level of the act of law and implementing acts necessitates the diversification – due to the nature of scholarly research in various disciplines of scholarship – of the principles of legal protection of intellectual copyright. Meanwhile, the legislator does not address this problem directly. In order to elucidate the scholarly problem which was formulated in this manner, the first part of the work was devoted to an analysis of the freedom of scholarly research as a category which is constitutionally protected. The second part is devoted to the problems of the legal bases of the protection of scholarly work, and to be more precise – of the right of the researcher to indicate authorship of a scholarly publication from the perspective of the regulation(s) of the constitution and other regulations, which develop and particularise its ordinances, including the provisions of the codices of ethics to which scholars are bound. Thus, one indicated the principles of reliable attribution of the authorship of research works, with special reference to research conducted in research teams of multiple people, including teams of interdisciplinary nature. In order to illustrate the theses which were put forward, one described the object of scholarly research realised in the domain of experimental exact sciences, and subsequently the principles of the publication of the results of the said research, along with the regulations of the attribution of the authorship of scholarly works which are published. The diagnoses which are formulated in this manner may contribute, in the opinion of the authors, to the raising of the awareness of the legislator and as a result they may influence favourably the direction(s) of the scholarship-related policy of the state in the course of the reform of scholarship which is being realised in Poland.

Doktryna „wolnego rynku idei”. Geneza, ewolucja oraz praktyczne zastosowanie A doctrine of “a free marketplace of ideas”. The origins, evolution and practical application 2011 Status Prezydenta RP na tle modeli ustrojowych głowy państwa w systemie parlamentarnym Status of the president of the Republic of Poland in the context of the constitutional models of the head of state in parliamentary system 2014 Posiadanie praw publicznych oraz posiadanie praw wyborczych jako przesłanki czynnego prawa wyborczego w Rzeczypospolitej Polskiej HAVING PUBLIC RIGHTS AND VOTING RIGHTS AS A PREREQUISITE OF THE ACTIVE RIGHT TO VOTE IN THE POLISH REPUBLIC 2015 Granice wolności wypowiedzi rzeczoznawcy majątkowego Boundaries of the Freedom of Expression in the Case of an Appraiser 2018 Zasada ochrony samorządności terytorialnej. Studium konstytucyjne The Principle of Protection of the Local Government. A Constitutional Study 2018
2022 © CEEOL. ALL Rights Reserved. Privacy Policy | Terms & Conditions of use
ICB - InterConsult Bulgaria core ver.2.0.1201