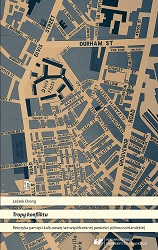 Author(s): Leszek Drong
Subject(s): Politics / Political Sciences, Politics, History, Anthropology, Social Sciences, Language and Literature Studies, Studies of Literature, Communication studies, Sociology, Recent History (1900 till today), Other Language Literature, Culture and social structure , Sociology of Culture, Theory of Literature, Politics of History/Memory, Peace and Conflict Studies
Published by: Wydawnictwo Uniwersytetu Śląskiego
Keywords: Cultural Memory; Rhetoric; Troping; Fiction; Troubles; Northern Irish; Reconciliation; Community
Summary/Abstract: “Troping the Troubles” shows how recent Northern Irish fiction remembers the past. The focus of this work is on recent history and contested narratives of the past; it seeks to illustrate the significance of cultural representations of the Troubles in shaping collective memory. Northern Ireland provides a particularly interesting set of historical, social and political circumstances to inspire literary productions, which Drong calls, following Birgit Neumann, fictions of memory. Novels connected with the Troubles, featuring characters preoccupied with the past – with remembering or forgetting the conflict – are explored at length here, particular heed being paid to how they affect models of mnemonic performance. Inspired by recent research into memory studies, and cultural memory studies in particular, Drong identifies distinctive aspects of memory culture in Northern Ireland. In consequence, Troubles fiction proves to be a uniquely adequate illustration of performative memorealism, a discourse that is responsible for a cultural normativization of the past due to its potential to create the illusion of history’s stability and identity in the characters’ or/and narrators’ memories. Chapter 1 is concerned with the historical and political background that underpins most of the novels interpreted in Chapters 3-6. Its main purpose is to explain the circumstances that had led to the establishment of Northern Ireland in 1921 and then to the eruption of violence there in 1969. A detailed discussion of the Troubles is offered to explain and/or refute common misconceptions connected with the conflict, including the allegedly religious motivations of the two major communities in Northern Ireland. The current situation in the province is also explored at some length to explain why Brexit may threaten the peace process. Chapter 2, in turn, focuses mostly on memory studies and its relevance to Northern Irish fiction. Recent developments concerning cultural memory studies are placed in political and historical contexts relevant to Irish studies to produce a rhetorical perspective that is particularly sensitive to how Irish fictions of memory perform, i.e., what role they play within Irish memory culture. The argument offered in this chapter is premised on the assumption that literary works are both representational and performative: their performance in culture depends upon the illusion of reference (hence the significant role of memory in fiction). Chapter 2 also raises the issue of Northern Irish literature as a distinct category and its usefulness for further analysis. The chapters concerned with Northern Irish novels focus on „Reading in the Dark” by Seamus Deane, „Ripley Bogle” by Robert McLiam Wilson, „One by One in the Darkness” by Deirdre Madden and „The Truth Commissioner” by David Park. Those four works of fiction are discussed in light of the concerns raised in Chapter 2 but also much attention is given in those readings to their specific historical and geographical circumstances, the linguistic minutiae, all those apparently trivial, idiosyncratic details suppressed by mainstream history but intriguing and captivating as aspects of minority narratives, counter-narratives, postnational/transnational memory cultures, etc. The concluding chapter introduces the concept of restorative memory, which is not so much concerned with truth recovery per se but instead envisages either individual or communal redemption or restitution if those may lead to reconciliation within Northern Irish society.