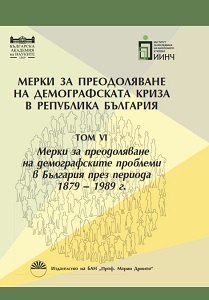 Measures for overcoming the demographic crisis in the Republic of Bulgaria

Author(s): Shtelian Shterionov, Penka Peikovska, Ventsislav Muchinov, Daniela Angelova, Kameliya Lilova, Mario Aleksandrov
Subject(s): History, Social Sciences, Sociology, Social history, Demography and human biology
Published by: Институт за изследване на населението и човека - Българска академия на науките
Keywords: Historical Demography; Bulgarian History 1878-1944; Legislation.
Summary/Abstract: Identifying measures to tackle demographic problems and their implementation is the State’s purposeful activity reflecting Government authority’s views in the field of demographic development and is aimed at the formation of the desired type of population’s reproduction. This type of activity in Bulgaria has mainly been oriented in three main lines over the reference period: First: focusing fertility rate improvement; second: mortality rate reduction; Third: population’s territorial redistribution impacting the mechanic growth. Based on the analysis we can say that measures, which were aimed at resolving demographic problems in the country, took place in Bulgaria throughout the studied period. These were characterised as follows: 1) they were based on conceptual formulations, distinguished by its relevance, and timeliness; and 2) stressed continuity both over time and in relation to the purpose for which they were scheduled. That turned into one of the factors affecting the population growth reported until 1989. In spite of the registered growth, the negative trend was defining the overall dynamics of the natural increase values, whose drop for the period 1881–1989 was nearly 30 times (from 16,9‰ in 1881 to 0.6‰ in 1989). That trend was a product owed to a number of different reasons – the shrunk scope of measures conducted, the unrealistic defining of the main subject in individual directions of theirs, inefficiency of some of the principles that kind of activity was built upon, the discrepancies between legal standards and actions applied in the course of the implementation thereof, etc. Moreover, those were the key circumstances that predetermined the chance to fulfil the main objective meant to be fulfilled by that type of policy, i.e. the achievement of sustainable demographic development.