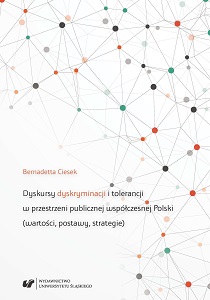 Author(s): Bernadetta Ciesek
Subject(s): Language studies, Theoretical Linguistics, Applied Linguistics, Western Slavic Languages
Published by: Wydawnictwo Uniwersytetu Śląskiego
Keywords: discrimination; tolerance; public space; Poland
Summary/Abstract: The aim of the present dissertation is to indicate the aspects of discrimination and tolerance existing in Polish public space together with the attitudes, values, and ideologies associated with them. The methodological framework of the work is discourse analysis, also in its critically-oriented variant. The first part is directed at developing a suitable conceptualization of the key notion, such that would be the most appropriate for attaining the established goals. The author refers both to tradition as well as to the most recent findings of contemporary humanities, both in the field of linguistics as well as sociology and philosophy. The linguistic perspective encompasses the accomplishments of the so-called French and Anglo-American school. The author also discusses the Polish tradition of research into functional styles. Due to the fact that the understanding of the category of discourse in some, especially English- and French-language studies is in conflict with the idea of text as defined by Polish researchers, this key notion has been taken up in the part of the work devoted to theoretical and methodological considerations. Only an appropriate narration of text and discourse does allow for arriving at such a definition of discourse that has a cognitive value in the studies on social communication. The author of the present work, inspired by the writings of Michel Foucault, adopts a conception of discourse that draws together the achievements of Lublin’s ethnolinguistics, constructivist theory of the so-called second reality formulated by Michael Fleischer, and the paradigm of critical discourse analysis. It treats discourse as the highest unit of the language/communication structure of abstract nature and distinguishes this category from text, which is seen as a separate entity of material nature. The identification and description of gestures of exclusion and tolerance requires an introduction of the category of the Other, who is seen by the author as not belonging to the community of the Self, differing from them in terms of the outlook on life, the system of values, lifestyle, and religion. On the basis of the analysis of selected discourses, e.g. the feminist, nationalistic, national and right-wing, religious, and the discourse of “Tygodnik Powszechny” magazine, the author reconstructs the images of the Other functioning in them, the ways in which they have been profiled (as Aliens, Enemies, the Third), and the attitudes towards the Otherness manifested by discourse communities. The author also discusses the values and convictions associated with the discourse conceptualizations of the world and relationships with the Others, as well as describes the communication strategies of the subjects of the discourses under analysis. The author avoids an arbitrary classification of the discourses under analysis as representing either tolerance or exclusion, demonstrating that in nearly each of them both principles can be identified.