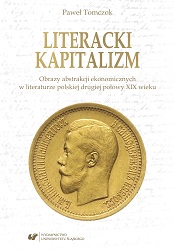 Author(s): Paweł Tomczok
Subject(s): Language and Literature Studies, Economy, Cultural history, Studies of Literature, Polish Literature, 19th Century, Theory of Literature
Published by: Wydawnictwo Uniwersytetu Śląskiego
Keywords: literature; capitalism; economy; the Polish literature; literature of the 19th century
Summary/Abstract: The work entitled „Literary capitalism. The images of economic abstracts in the Polish literature of the second half of the 19th century” offers an analysis of capitalism based on literary historical sources. The three initial chapters Focus on theoretical aspects of the entire project. In the first chapter, I have systematized various traditions of the economy of literature developing mainly in the English- and German-speaking countries. Here, I distinguish two ways of talking about economy in literature, which stem from Marxist literaturę studies on the analysis of ideology and class divisions in culture, and the research on the relation between economy and a literary form. Chapter Two discusses the Marxist theory adapted to the studies on the economy of literature. Here, I refer to the transition from traditional Marxism to New Marx Reading (neue Marx-Lektüre). I validate the thesis that economic categories require a discursive legitimization to sustain their being in force and the validity of real abstracts. The discursive legitimization and its criticism may have their place in economy, but also in literature and in journalistic writing. This chapter also deals with the problem of using literary texts as “sources” for historical studies, including the social and economic history, and not merely the history of discourse or mentality. The point of departure is the analysis of the classical formulations of the methodology of historiography with a view to arrive at an extended theory of the source, which can be derived from the works of Walter Benjamin. The third chapter concerns the problems of the history of the second half of the 19th century. How can the tradition of the economy of literaturę be employed for the studies on Polish literary capitalism? Definitely, not by means of using foreign research as ready-made patterns that can be directly transferred to Polish literature. Therefore, I trace the problems of the complex duration of capitalism in various works of the historians of literature, ideas, society, and economy. I analyse the 19th-century field of power and its ideology. Moreover, I refer to the discourse of underdevelopment and marginality. In this chapter, I also justify the choice of chronological frames of the present book. The starting point is constituted by the middle of the century – the events of Galician Slaughter and the Spring of Nations are seen as a common experience which anticipated modern social conflicts. I have demarcated the year 1900 as the end-point, thereby renouncing the analysis of the texts that approximated the revolution of 1905 which redefined the political divisions of the Polish society. Between these dates, many important events and economic processes occurred, including the industrialization supported by customs policy and the global agrarian crisis, both of which deeply changed the economic and social structure of Polish lands. The analysis of various chronological patterns allows for the identification of civilizational, economic, social, and cultural processes that occurred at an uneven pace. The complexity of both local and global chronologies renders it impossible to form a great uniform narration on the extended duration of the Polish underdevelopment or marginality, compelling instead to trace the noncontinuous character of the peripheral location. Chapter Four presents the problems of agrarian, middle-class, and industrial capitalists. The basic interpretational category constitutes “the subject of capitalist desire”. Capitalism requires of individuals to become the personifications of commodity, money, and abstraction. Literature perfectly describes the dialectal adventures of individuals embroiled in capitalist desires, as well as the oppositions between various positions that were available for contemporary capitalists, such as ascetic, merchant, speculator, industrialist, or rentier. In the fifth chapter, I discuss subordinate groups: peasants, workmen, urban mob and proletariat. Here I research the ways of discursive enslaving of individuals, as well as the chances of emancipation and class struggle. The most important process that was taking place in the second half of the 19th century as regards the structure of subordinate groups is connected with the rejection of the feudal forced labour based on physical violence and replacing it with apparent voluntary contracts between the labourer and the capitalist, yet practically based on anonymous economic violence that affects the proletarians devoid not only of capital goods, but also of their livelihood. The final three chapters have been devoted to the interpretation of the problems of economy of the most important novels of the period under investigation: „The Doll” by Bolesław Prus, „The Promised Land” by Władysław Reymont, and „Homeless People” by Stefan Żeromski. These novels present three kinds of psychopathology of capitalist personification which stem from the inability of continuing the parents’ traditions, either due to social advancement, or social degradation. The literature of this epoch frequently portrays spectacular falls of fathers who can no longer impose their rules on their sons – they are too weak, because economic changes deprived them of their high social status. Their place, the place of the father who insists on respecting the rules, is being occupied by the capital, which obliges the sons deprived of their fathers to become the subjects of capitalist desire and to reject the tradition of their ancestry.