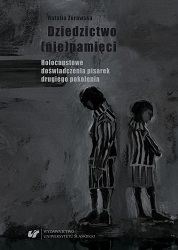 Author(s): Natalia Żórawska
Subject(s): Language and Literature Studies, Studies of Literature, Polish Literature, History of the Holocaust, Theory of Literature
Published by: Wydawnictwo Uniwersytetu Śląskiego
Keywords: trauma; posttrauma; Holocaust; women's prose; autobiographism
Summary/Abstract: The aim of this monograph is to depict the Holocaust motif in women’s autobiographical prose after 2000. As the author of the book shows, for the last few years more and more female writers of the Second Generation after the Holocaust have been writing down their traumatic experiences caused by their – socially stigmatised – Jewish descent. In the first chapter, the author describes in general the notion of women’s Holocaust prose; she stresses that the Shoah is a culturally tabooed issue and, similarly to the prose written by women, is often ignored or negatively valorised. In the subsequent chapters, the author provides the examples of autobiographical books by Ewa Kuryluk, Agata Tuszyńska, Roma Ligocka, and Magdalena Tulli, which testify to the strengthened position of women’s autobiographical prose within the literature of the Shoah. While interpreting literary pieces, the author focuses primarily on the aspects of memory, forgetting, and postmemory, which are the foundations for Tulli’s short stories, Tuszyńska’s saga, and Ligocka’s novels. The reflections presented are grounded upon the motif of trauma of the first generation – represented by the writers’ mothers – and that of wounds of the second generation, which is the generation that has inherited the past tragedies from its relatives. The aim of this work is to show the relations between that which is bygone, and the present and future, as well as to make one sensitive to the individual experience of the writers in reference to the whole Jewish community. The chosen research perspective makes it possible to compare the analysed pieces along with emphasising their similarities and differences, and to stress that which is particularly popular in Holocaust narrations. „Legacy of (non-)Memory. Holocaust Experiences of the Second Generation Women Writers” is a voice in a discussion on the Shoah and adds to constantly extending reflections on trauma studies in Poland. A detailed analysis of the abovementioned pieces of women’s prose is supported with historical, sociological, and psychological contexts, but also fragments of interviews, providing a sui generis commentary on the discussed issues. The monograph is an attempt at outlining women’s Holocaust prose in reference to Polish-Jewish literature and at drawing attention to the characteristics of this issue.