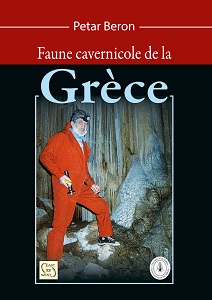 Author(s): Petar Beron
Subject(s): History, Essay|Book Review |Scientific Life, General Reference Works, Geography, Regional studies, Regional Geography, Historical Geography, Environmental Geography, Geomatics, Local History / Microhistory, Scientific Life, Source Material
Published by: Издателство »Изток-Запад«
Keywords: Cave; fauna; Greece; Balkan Peninsula; French, species; animals; caves; biology; speleology; biospeleological; research; exploring; exploration; zoology; zoogeography; scientific publication; book; books
Summary/Abstract: Petar Beron Sc.D worked at the Institute of Zoology and the National Museum of Natural History at the Bulgarian Academy of Sciences as a biologist from 1963 to 2010. Specializing in acarology and Biospeleology, he began exploring caves and cave fauna since 1955. He went on expeditions in New Guinea, Indonesia, Mexico, Cuba, China, Vietnam, on the Balkan Peninsula, in Corsica and South America. In his journeys, he discovered many new species of caves and animals. Author and co-author of many books and articles on speleology, zoogeography, and acarology. The second monograph of the series, devoted to the cave fauna of the Balkan Peninsula, treats Greece, a country full of caves (more than 10 miles) and only 240 caves have been the subject of biospeleological research. The 630 species of cavernicolous animals, published until 2015, are listed with their localities and notes on their biology. The caves of some animals are briefly described, and some observations have been made of the zoogeography of this fauna. The Greek fauna is compared with the cave faunas of neighboring countries. The bibliography contains more than 300 titles of works regarding the Greek fauna inhabiting the caves. This fauna is very different from the fauna of neighboring countries. During the author's field surveys (since 1968) he has found several new species such as Speleodentorcula, Telsonius, Titanophyllum, Thassoblaniulus, Alistratia, Maroniela, Jason and others.