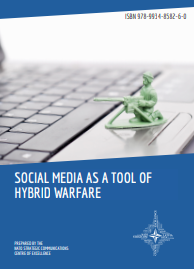 Author(s): Sanda Svetoka
Contributor(s): Anna Reynolds (Editor), Linda Curika (Editor)
Subject(s): Politics / Political Sciences, Politics, Social Sciences, Economy, Psychology, Media studies, Communication studies, Sociology, Security and defense, Social psychology and group interaction, Methodology and research technology, ICT Information and Communications Technologies
Published by: NATO Strategic Communications Centre of Excellence
Keywords: media; communication; information; hybrid warfare; tool; strategic communication; politics; cyberspace; social media;
Summary/Abstract: The development of information technology has changed the nature of conflicts by creating an additional layer of complexity to traditional battle spaces. Nearly global access to the virtual environment has created numerous opportunities to conduct battles online affecting events in both the physical domain, such as computer systems, and in the cognitive domain of people’s attitudes and beliefs. Recently we have witnessed how both states and non-state actors use hybrid approaches to pursue their political and military aims, skilfully combining military operations with cyber-attacks, diplomatic and/or economic pressure, and information (propaganda) campaigns. Over the past decade, social media has rapidly grown into one of the main channels of communication used today. Virtual communication platforms have become an integral part of warfare strategy. The recent conflicts in Libya, Syria, and Ukraine have demonstrated that social media is widely used to coordinate actions, collect information, and, most importantly, to influence the beliefs and attitudes of target audiences, even mobilise them for action. Given this state of affairs, the NATO Strategic Communications Centre of Excellence (NATO StratCom COE) was tasked with looking into how state and non-state actors leverage social media as a tool for conflict and hybrid warfare strategies. The following topics will be addressed in the report: • What is the role of social media in hybrid warfare? How is it ‘weaponised’? • What techniques and tactics do state and non-state actors employ to support their political and military aims using social media? What effects can they achieve? • What can NATO and its member nations do to identify and counter the malicious use of social media? We hope that this paper will serve as a comprehensive introduction and useful educational material for anyone interested in understanding the complexity of today’s information environment, and specifically the techniques of influence used in the digital space. The report summarises the conclusions of research commissioned by the StratCom COE—Internet trolling as hybrid warfare tool: the case of Latvia by the Latvian Institute of International Affairs (LIIA) in cooperation with Riga Stradiņš University, Social influence in Russia-Ukraine-conflictrelated communication in social media by a team of Polish researchers, Network of terror: how Daesh uses adaptive social networks to spread its message by Joseph Shaheen, US State Department Fellow at the StratCom COE, as well as discussions from the seminars and conferences conducted by the COE over the course of 2015. The StratCom COE would like to thank Thomas Elkjer Nissen, Head of the StratCom Section of the Royal Danish Defence College, Dr Rebecca Goolsby, Project Officer at the US Office of Naval Research, Col (rtd) Ian Tunnicliffe, Director of Accordance Associates, Prof Aki-Mauri Huhtinen, Professor of Military Leadership and Management at the Finnish National Defence University, Prof Ben O’Loughlin, Professor of International Relations at the Royal Holloway University of London, Nik Gowing, Visiting Professor in War Studies at Kings College London, Assoc prof Cristina Archetti, Lecturer at the University of Oslo, as well as Mark Laity, Chief of Strategic Communications at NATO SHAPE, for valuable contributions to the social media related discussions organised by the StratCom COE.