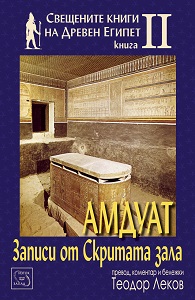 Author(s): Teodor Lekov
Contributor(s): Emil Traykov (Illustrator)
Subject(s): History, Philosophy, Language and Literature Studies, Archaeology, Literary Texts, Fine Arts / Performing Arts, Cultural history, Foreign languages learning, Museology & Heritage Studies, Architecture, Visual Arts, Studies of Literature, History of Philosophy, Non-European Philosophy, Special Branches of Philosophy, Ethnohistory, Ancient World, Theology and Religion, Comparative Studies of Religion, Religion and science , Other Language Literature, Ancient Philosphy, Middle-East Philosophy, Philosophy of Religion, Philosophy of Language, Philology, Translation Studies, History of Religion
Published by: Издателство »Изток-Запад«
Keywords: Ancient Egypt; civilization; religion; Gods; afterlife; culture; sacred knowledge; Egyptology; translation; Egyptian terminology; papyrus; magical; literature; kingship; immortality; study; hieroglyphic texts; scientist; archaeologist; book;books;
Summary/Abstract: "Amduat – Text of the Hidden Chamber" is an ancient Egyptian esoteric book that describes and magically recreates the journey of the Sun God to Duat (the Realm of the Dead). The book has been recorded on the walls of the royal tombs in the Valley of the Kings - it contains the names of the inhabitants of the afterlife, their sacred images and spells to overcome the obstacles in this journey. It is a secret doctrine taught by the Egyptian king and his companions. It appears for the first time in the middle of the second millennium BC, and its tradition is preserved until the sunset of Egyptian civilization. The book is a magical means of immortality, and with its help one goes the same space cycle to his resurrection as the Sun God on his night journey to the new sunrise. The edition contains an introduction, a translation from Ancient Egyptian and a commentary on the book. It is published for the first time in Bulgarian.