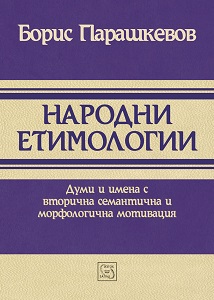 Words and Names with Secondary Semantic and Morphological Motivation

Author(s): Boris Parashkevov
Contributor(s): Vera Gyoreva (Editor)
Subject(s): Philosophy, Language studies, Language and Literature Studies, Theoretical Linguistics, Special Branches of Philosophy, Phonetics / Phonology, Morphology, Lexis, Semantics, Pragmatics, Eastern Slavic Languages, Philosophy of Language, Philology
Published by: Издателство »Изток-Запад«
Keywords: Vocabulary; Etymology; word; words; nouns; unfamiliar form; language; adjectives; verbs; Bulgarian; Bulgaria; encyclopedic; dictionary; linguistics; origins; lexicology; etymological; terms; book, books
Summary/Abstract: Etymology is the most popular area of linguistics, particularly its lexicology. This is the study of the history of words, their origins, and how their forms and meanings have changed over time. By extension, the term "the etymology (of the word)" means the origin of the particular word. In a simpler sense today, we associate the term Etymology with clarifying the question of where a foreign or unknown word comes from. "Folk Etymology" represents the naive attempt to make sense of a vague word. It is a change in a word or phrase resulting from the replacement of an unfamiliar form by a more common one. This is sometimes called pseudo-etymology, popular etymology, or analogical reformation. The form or the meaning of an archaic, foreign, or otherwise unfamiliar word is reanalyzed so as to resemble more familiar words or morphemes. "Folk Etymology" (subtitled "Words and Names with Secondary Semantic and Morphological Motivation") traces the true origin of copious words, indicates which use is legitimate and what kind of deviation is involved from the original form, as well as its acceptability and its avoidance from loanwords when used in their natural environment beyond the Bulgarian language. The book dedicates itself to the 120th anniversary of the publication of the monograph "Contribution to the Bulgarian Vernacular Etymology" by Prof. Ivan Shishmanov (1862-1928).