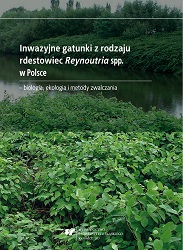 Author(s): Barbara Tokarska-Guzik, Barbara Fojcik, Katarzyna Bzdęga, Alina Urbisz, Teresa Nowak, Andrzej Pasierbiński, Zygmunt Dajdok
Subject(s): Geography, Regional studies
Published by: Wydawnictwo Uniwersytetu Śląskiego
Keywords: Biology
Summary/Abstract: A publication prepared based on the document “Guidelines on the eradication of knotweed species in Poland”, commissioned by the General Directorate for Environmental Protection. Prevention of invasion is considered to be the most effective method for reducing the environmental and economic consequences of the spread of alien species. In addition to raising awareness of the causes and consequences of biological invasions, an essential element of a preventive strategy is the development of effective organizational and legal solutions, including acts regulating the import of alien plant species and methods of handling plants that already exist in anthropogenic and other habitats. Poland, by ratifying in 1995 the Convention on biological diversity (CBD), committed itself, among other things, to preventing the introduction of, controlling, or eradicating those alien species which threaten ecosystems, habitats or species (as far as possible and as appropriate) (Article 8h). The groupof alien plants includes knotweed species Reynoutria spp. (= Fallopia spp.) (Tokarska-Guzik et al. 2012, 2015a). Because of the threats to the biodiversity of plants and animals in specific areas associated with the spread of knotweeds and the formation of communities in which they dominate, often in large areas, these species have been listed in many countries as among those requiring eradication (Child and Wade 2000; Lowe et al. 2000). Failure to adopt measures limiting their occurrence and/or eradicating these plants can promote further invasions and increase the scale of their establishment. Due to certain morphological and biological features of knotweed species and their ability to adapt to various environmental conditions they have also been regarded as plants which are particularly difficult to control (e.g. Bímová et al. 2001; Child et al. 2001; Cronk and Fuller 2001).Regulation of the European Parliament and of the Council (EU) no. 1143/2014 of 22 October 2014 (EU Regulation) on the prevention and management of the introduction and spread of invasive alien species states that “Member States shall have in place effective management measures for those invasive alien species of European Union concern which the Member States have found to be widely spread on their territory, so that their impact on biodiversity, the related ecosystem services, and, where applicable, on human health or the economy,are minimised” (ch. 4, Article 19). The issue of effective eradication of invasive species belonging to the genus Reynoutria has been addressed in many scientific reports and methodological guides (e.g. Child and Wade 2000; Bímová et al. 2001; Kabat et al. 2006; The knotweed code… 2006; Barták et al. 2010). Information about methods of eradication and prevention is also provided in the GISP database (Global Invasive Species Programme) (Mooney 1999). One frequently emphasized fact is that once well-established, populationsof knotweed species are very difficult to eradicate. This should be considered when planningactions on national, regional and local levels. The aim of this publication is to summarizecurrent knowledge about the occurrence of alien invasive knotweed Reynoutria spp. (= Fallopia spp.) species in Poland: Japanese knotweed (Reynoutria japonica), giant knotweed (Reynoutria sachalinensis) and their hybrid – Bohemian knotweed (Reynoutria × bohemica), and to prepare guidelines allowing for effective measures to eliminate or minimize the risks associated with their spread. This document is meant to serve as a guideline for local authorities, academic institutions, nongovernmental organizations and citizens, providingthem with information on the identification of knotweed species, available legal measures enabling actions to control these species, and, above all, a description of the most effective methods for elimination and minimizing their further spread.