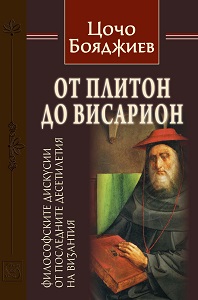 Author(s): Tzotcho Boiadjiev
Subject(s): Christian Theology and Religion, History, Cultural history, History of Philosophy, Epistemology, Ethnohistory, Middle Ages, Theology and Religion, Comparative Studies of Religion, Philosophy of Middle Ages, 13th to 14th Centuries, 15th Century, Eastern Orthodoxy, Philosophy of History
Published by: Издателство »Изток-Запад«
Keywords: Byzantium; philosophy; literature; philosophical; views; Byzantine; culture; 15th century; traditions; Middle Ages; research; book; books
Summary/Abstract: The presented text constitutes the literary basis of my lecture given to the students of philosophy at Sofia University. Of course, the transcript only transmits schematically the actual content of the course. The living atmosphere of communicating with the audience remains unbearable. Stylistically, the text follows Étienne Gilson's recommendation to read the studied author with a pencil in hand. At the same time, he, in some way, stylized the discussed contraversion, ignoring the ecclesiastic, ideological, political, and other contexts of discussion. This is done for the sole purpose of demonstrating the philosophical substance as much as possible in the intellectual disturbances of the last decades of Byzantium. The hope is that such an "extract" will show how inherently inappropriate and misleading is the question often asked: "Is there such a thing as Byzantine philosophy?" For several years now, studies have confirmed the immanent philosophical character of Byzantine culture. This book is a modest attempt to add a few more arguments in this direction. - Tzotcho Boiadjiev