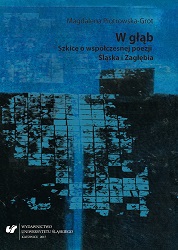 W głąb. Szkice o współczesnej poezji Śląska i Zagłębia
Downwards. On the Contemporary Poetry of Silesia and the Dąbrowa Basin

Author(s): Magdalena Piotrowska-Grot
Subject(s): Language and Literature Studies, Literary Texts, Poetry, Studies of Literature, Polish Literature, Theory of Literature
Published by: Wydawnictwo Uniwersytetu Śląskiego
Summary/Abstract: The following publication constitutes the aftermath of a research project concerned with contemporary poetry of Silesia and the Dąbrowa Basin. The author does not, however, focus on a synthetic approach, attempting to assign particular poets to distinct schools and poetic groups, since that groundwork has already been laid by previous research on the topic, resulting in interesting and exhaustive – at least for the moment – conclusions. The following monograph constitutes rather an analytical and interpretative study which concentrates upon the deep semantic strata of the discussed works, showcasing important changes which the poetry of the region is undergoing, as well as its diverse, eclectic and dynamic character. The essays concern selected poems by writers coming from the territory of Silesia and the Dąbrowa Basin. The analysis and interpretation oscillate primarily around the different ways in which space is imagined and created in the worlds created by the selected authors – Maciej Melecki, Krzysztof Siwczyk, Grzegorz Olszański, Marta Podgórnik, Marek Baczewski, Paweł Lekszycki, Paweł Sarna, Paweł Barański. Nonetheless, it should be emphasised that it is a distinctively and broadly understood space, which encompasses both real places as well as non-places (Marc Aúge), both utopian and heterotopic visions whose examples can be found in the selected poems. While speaking of nonplaces, it is important to remember about the eschatological dimension, which appears commonly in the discussed poetry, while remaining anti-metaphysical in character as the poets of the region showcase in their poetry the progressing implosion of myths and images of archetypal places. In this way, the readers of their poetry can seamlessly transition from the imagery of space to existential issues (approached from the anthropological/anthropocentric, but also post-humanist perspective).The imagination of the discussed poets, while functioning in distinctly varying ways, seems to remain informed by the postindustrial space of their quotidian experience and allows us to easily grasp the points of convergence, which constitute the poetic imagination of the selected poets. It should be, however, noted that the space, which constitutes the departure point for the subsequent analyses, functions in the poetic world not only as the backdrop but also as theco-participant of everything that transpires. The world around the people who appear in the poems is molded by their influence, but in turn, the people are also molded by their environment. This coexistence of man and space in the analysed poems, in turn, allows for interesting and surprising readings. Speaking of the peculiarity of space functioning in the poems, it is necessary to note that the subject of the particular analyses includes also the space of the text itself – its form, genological references, the particular texture of places (a term coined by Elżbieta Rybicka) created by a given text of culture, which significantly influences literary works. The following monograph contains research findings which, even though they lie within the scope of the author’s PhD dissertation, constitute an attempt at bridging the gap between the previous research project, expanding upon its findings, and at the same time aim to lay the groundwork for a new academic study.