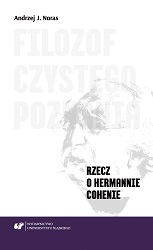 Author(s): Andrzej J. Noras
Subject(s): History of Philosophy, Special Branches of Philosophy, Contemporary Philosophy
Published by: Wydawnictwo Uniwersytetu Śląskiego
Summary/Abstract: Hermann Cohen remains one of the most important philosophers of the turn of the 19th century. He is known first and foremost as the founder of the Neo-Kantian Marburg School, which, alongside the Baden School, constituted the primary center of philosophicalthought in Germany at that time. Nonetheless, Cohen has not been widely recognized for his contributions to the study of philosophy due to the fact that, because of his Jewish heritage, he worked at the provincial University of Marburg in Hessia. The following monograph accounts for his relative lack of recognition and thus begins with an overview of Cohen’s biography. Following that introduction, the monograph has been divided into two parts.The first part concerns theoretical philosophy, which constituted the cornerstone of Cohen’s doctrine. The Marburg Neo-Kantianism is considered to be the most radical version of anti-psychologism and logicism; nonetheless, Cohen started his career as a philosopher as a disciple of Heymann (or Chajim) Steinthal, a linguist and a philosopher, as well as Moritz (or Moses) Lazarus: the publishers of the periodical Zeitschrift für Völkerpsychologie und Sprachwissenschaft. In 1871, he published the first edition of Kants Theorie des Erfahrung,which was later republished in 1885 and 1918. In this part of the monograph, the author presents the evolution of Cohen’s ideas, who gradually progressed toward radical anti-psychologism. This stance is clearly reflected in his 1902 book Logik der reinen Erkenntnis, which shows Cohen as a philosopher interested in grounding the notions of philosophy and science. Cohen, then, is seen as a thinker who searches for conditions which would guarantee the objective value of cognition. Thus, his epistemological program becomes an alternativefor the phenomenology school of thought, which came to prominence in the beginning of the 20th century. Cohen remains convinced that the objective value of cognition is irrevocably connected with a search for the source. The concept which becomes crucial for his philosophy is the notion of the source (Ursprung), which for Cohen signifies a search for the rules whichgovern cognition and which ensure its objective value. What is particularly interesting about Cohen’s theory of cognition is the fact that it constitutes an attempt at a transcendental grounding of cognition, which is sometimes referred to as “a theory of cognition withoutthe subject” or “idealism without the subject.” This phrase, coined by Manfred Brelage, has its origins in the fact that Cohen’s idealism is a transcendental idealism par excellence. For that reason, Gerhard Lehmann calls Cohen “the archpriest of science.”The second part of the monograph is devoted to practical philosophy, and ethics in particular. This ethics is connected with the ethics of socialism, developed by the protoplast of the Marburg School, even though Cohen is interested not so much in the subject of the ethics itself, but rather in the grounding of ethics in science. He is convinced that while mathematical natural history has its grounding in logic, ethics has its groundings in jurisprudence. Next, the author proceeds with an analysis of the philosophy of law, whichbecomes even more interesting given the fact that Rudolf Stammler, one of the most distinguished philosophers of the law of that period, also belonged to the Marburg School. Thus, the author discusses the conception of varying content of the law of nature. Moreover, itshould also be noted that—as Claudius Müller argues in his book—during the time of the Nazi regime, libraries in Germany discarded all books by Hermann Cohen, who was Jewish, as well as those of Karl Vorländer, who was a socialist and one of Cohen’s students. Moreover, the author focuses on the philosophy of religion—crucial due to Cohen’s Judaism—as well as aesthetics and psychology. The monograph constitutes an overview of Cohen’s views, painting the thinker as a scholar determined to discover the foundation inwhich he could ground his science. This process was so crucial for the founder of the Marburg School that his philosophy is often equated with constant critique. Martin Heidegger—involved with Marburg in 1923–1928—in his book Grundprobleme der Phänomenologie (1919/20), uses the figure of Rudolf Hermann Lotze, but doesn’t directly refer to that fact. Meanwhile, Lotze, in his critique of the common practice of grounding philosophy in the theory of cognition, writes, “[…] such tasks are forced to find solutions: the constant sharpening of knives is boring when there is nothing to be cut.” This sharpening of the knives is, indeed, what seems to lie at the core of Cohen’s philosophy. Nonetheless, what this monograph aims to emphasize is the meaningfulness of the task.