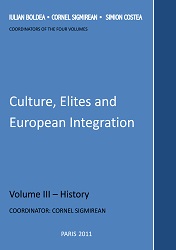 Author(s): Iulian Boldea, Cornel Sigmirean, Simion Costea
Subject(s): History, Political history, Social history, Ancient World, Modern Age
Published by: Publishing Inc. European Readings & Prodifmultimedia/Editura Napoca Star
Keywords: Euro-Atlantic political-military structures; Eastern Europe; History;
Summary/Abstract: Argument In 1989, Romania, as the entire Eastern Europe, broke with communism, choosing instead the West European model of democracy. On the level of external politics, the demise of the Soviet Union encouraged Romania to realign its efforts toward the admission of the country in the Euro-Atlantic political-military structures. Hesitant at the beginning, as a consequence of the conservatory views of the main political leaders in power at the beginning of the 90’s, Romania signed the European Union Association Agreement in February 1993. For the Romanians it meant the long way of “coming back home” to Europe and assuming the values of democracy through the protection of fundamental human rights and the reconsideration of the policies concerning the national and confessional minorities. In 2004, Romania became a member of NATO together with Bulgaria, Estonia, Latvia, Lithuania, Slovakia and Slovenia, and since the beginning of 2007, a member of the European Union. Romania’s integration in the Euro-Atlantic structures also meant for the Romanians a profound examination of their historical consciousness and the recovery of their European past. Certainly, history does not mean par excellence a unifying undertaking, but it can offer legitimacy, justification, and models for some of the present dilemmas. Nevertheless, we cannot ignore the educational potential of history. Thus, through national and international scientific studies and conferences, the historians can recompose the common past of the Romanians and other European peoples, the Europeanization process of the Romanian culture and society in the modern epoch and the birth of the Romanians’consciousness of Europeanness. Such an undertaking is also taken by the volume Culture, Elites and European Integration (Culture, Elites et Intégration européenne), which gathers the scientific papers of the Conference European Integration-Between Tradition and Modernity, organized on 27-28 October 2011. Undoubtedly, the Romanians have a common European historical past. Romania’s present space belonged to the Roman Empire for a long period of time during the antiquity. This way, the one Latin people in Eastern Europe was born, an important historical argument in their European option. Undergoing the major experiences that marked European history, from the separation of the Roman Empire into the Eastern and Western empires to the Great Schism in 1056 and later the birth of the national states at the beginning of the modern epoch, the Romanians formulated concrete options for the reintegration in the West European system of values. Subsequently, for the Romanians the entire process of the birth of modern society was under the sign of European values and models of society. Its turn under Soviet influence at the end of the Second World War changed Romania’s way from the European course, which it had followed since the 19th century. On a historiographical level, Romania’s European integration implies both a historical and a cultural process of re-evaluating its past. In this context, the studies in the present volume bring into light events, moments and projects that are relevant for the way the Romanians relate themselves to the common history of Europe.Cornel Sigmirean