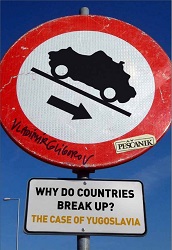 Author(s): Vladimir Gligorov
Subject(s): Politics / Political Sciences, Politics, History, Essay|Book Review |Scientific Life, Political Theory, Civil Society, Governance, Recent History (1900 till today), International relations/trade, Developing nations, Politics and society, Transformation Period (1990 - 2010), Cultural Essay, Political Essay, Societal Essay, Inter-Ethnic Relations, Politics of History/Memory, Politics and Identity, Peace and Conflict Studies
Published by: Peščanik NVO
Summary/Abstract: The book deals with the violent and inconclusive break up of Yugoslavia. The author relies on the rational political choice approach to construct an explanation that (i) given the preference of the exYugoslav nations for ethnic justice over individual liberties and rights, and (ii) given the influences of the long terra ethnic strategies and rivalries, the legacy of the four decades of communist rule, and the complexities of the post-socialist transformation process, the break up of their common country was what it took the Yugoslav nations to try to realize their political preferences. In Chapter 1 the process of “Balkanization” is discussed. First, the theory of constitutional choice is criticized. It is shown that the assumptions (stated and unstated) on which the theory is founded are not mutually consistent. Second, it is argued that that makes the idea of self-determination inoperable and self-destructive. Yugoslavia was founded on the principle of self-determination; it has been dissolving in accordance with the same principle. Third, the illusive idea of individual and ethnic identity, of the “self”, in the Balkans is described and analyzed. Fourth, the implications for the failure of any constitutional idea to be accepted as legitimate in Yugoslavia are drawn. In Chapter 2 the process of the discovery of liberalism during the communist rule is discussed and the reasons for its failure given. All the classical liberal ideas were discovered in Yugoslavia in conflict with the socialist principles; they failed to play a key role in the transformation of the country because they did not arise from an idea of a Yugoslav state. In Chapter 3 a “straightforward explanation” of the break up of Yugoslavia is given. It is argued that the state did not break up for economic reasons (as a way to get out of socialism), but for the following two reasons: (i) independent ethnic state is the long term strategy of Serbs and Croats (the two dominant Yugoslav nations); (ii) political preferences came to dominate the economic ones in the process of transformation. Given the goals and the preferences and given the facts of the ethnic configuration, the break up of Yugoslavia was inevitable and it inevitably had to be inconclusive. In Chapter 4 the contribution of the communist legacy is discussed and the record of individual and collective rights left in the ex-Yugoslav states is reviewed. It is shown that none of the newly established states has achieved a significant increase in those rights and is far from any ideal of a liberal state. In the conclusion, the idea that “Balkans are different” is rejected and it is argued that the failure of the principles of civic rights and international order to be respected and implemented will invariably lead to the same set of outcome. In that the importance of the case of Yugoslavia lies.