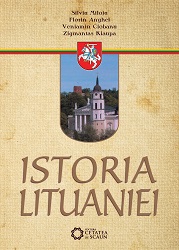 Istoria Lituaniei
The History of Lithuania

Author(s): Silviu-Marian Miloiu, Florin ANGHEL, Veniamin Ciobanu, Zigmantas Kiaupa
Subject(s): Politics / Political Sciences, History
Published by: Asociatia Romana pentru Studii Baltice si Nordice
Keywords: Romania;Lithuania;Lithuania – Poland;Grand Duchy of Lithuania;Christianization;Gedimid dynasty;Polish-Lithuanian Commonwealth;
Summary/Abstract: This book is the result of fruitful cooperation between Romanian and Lithuanian historians belonging to four university centers. It approaches from a variety of angles the history of Lithuania from the first settlement of the Baltic tribes on the eastern shores of the Baltic Sea to present. The first chapter deals with the earliest history of Lithuania, its highlights being on the formation of the Grand Duchy of Lithuania, the political, economic, cultural and social history of Lithuania under the Gedimid dynasty and the Christianization of Lithuanians, the last pagans of Europe, in 1387. The second chapter brings to the readers’ attention the personal union between Lithuania and Poland set up when the grand dukes of the former occupied also the throne of Poland. It emphasizes the role of Jogaila and Vytautas as the main characters of the story, but the aim is a larger one: it discusses the economic, social, political and foreign policy of the Grand Duchy of Lithuania up to the middle of 16th century. The Union of Lublin and its consequences to Lithuania are dealt with in the third chapter which also points out to the vices inscribed in the political system of the Polish-Lithuanian Commonwealth leading to the three divisions of Poland taking place at the end of the 18th century. The Lithuanians largely fell under Russian domination and shared in the fate of the Poles alongside which they struggled to re-establish the Union of Lublin. The aim of separating from the Russian domination was unsuccessful until the end of the First World War. The forth chapter presents the history of Lithuanians under Russian rule and explains the reasons for which the Russians decided to close down in 1832 the University of Vilnius and ban the Lithuanians the use of Latin alphabet between 1864 and 1904. The fifth chapter approaches the achievement of independence by Lithuania and the main lines of the political, social, economical and cultural interwar developments. The book highlights the consequences of the land reform, explains the failure of the democratic system, assesses the Lithuanian foreign policy especially with regard to Poland, Russia and Germany and explains the circumstances of Lithuania’s annexation by the Soviet Union. The implications of Soviet and German occupation regimes (1940-1990) were deep both on the majority and minority inhabitants of the country. The main developments in this respect are analyzed in the sixth and seventh chapters. They describe the implementation of the Soviet system in Lithuania in 1940-1941 and 1944-1990, the deportation of waves of tens of thousands of people to Soviet Union during Stalinism, the massacre of Jewish minority of Lithuania under German rule, the social, economic, cultural developments under Soviet domination, the birth of the dissident movement etc. and place emphasis on the Lithuanian devolution from the Soviet empire. The last chapter approaches the history of the second Lithuanian republic, its internal and external politics and highlights the integration within the EU and the NATO.