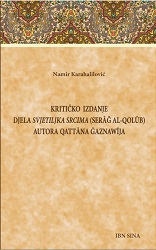 Author(s): Namir Karahalilović
Subject(s): Literary Texts, Cultural history, Studies of Literature, Theology and Religion
Published by: Naučnoistraživački institut »Ibn Sina«
Keywords: The Hearts’ Lantern; Persian literary tradition; Serāğ al-qolūb;
Summary/Abstract: The Hearts’ Lantern is one of the oldest and most important didactic prose works dealing with matters of religion and ethics written in the Persian tongue.In Persia itself, but also outside it (mostly on the Indian subcontinent, in Turkey and in the Balkans, and especially in Bosnia-Herzegovina), for centuries it was known and circlated via manuscripts. After the invention of the printing-press, it was at various times published in Iran and Afghanistan. However, none of those editions fulfil even the basic and necessary conditions for presenting a text to a scholarly audience, nor even to an ordinary cultured reader; namely, none of those printed editions made use of the most relevant primary manuscript sources. Even if we bear in mind that the fate of the autograph is still unclear, the repeated lack of proper philological preparation for publication was a serious methodological flaw which meant that The Hearts’ Lantern was mostly published in versions which for the most part do not correspond to its original form.This lack of scholarly editions, as well as the fact that the identity of the author is unknown, contributed to a marginalisation of this work, as it came to be classed as a popular work, and even as a common pamphlet, meant for a wide, and popular, readership. Such unfavourable development was helped along by several centuries-worth of ideological manipulations of the text wreaked by irresponsible scribes. Irresponsible or badly educated scribes were also responsible for two further misfortunes that plagued this work: probably convinced of the infallibility of their own linguistic ear and literary and aesthetic sense, whilst copying they would allow themselves to make changes and interventions in the text, shortening it or lengthening as they saw fit; and, secondly, incompetent scribes who were not well versed in the classical Persian, altered the classical prose style of the text to make it closer to the Persian language of their own time, which meant that the prose of The Hearts’ Lantern, over the long stretch of time in which it was circulated through manuscripts, lost many of its original linguistic and stylistic features, and with them its quality and value.In such circumstances, the value and the significance of this work was known only to specialist researchers, and this only based on the most relevant manuscript sources. Thus the preparation of the variorum edition presented itself as the main stepping stone towards the proper reception of the work, as well as its critical reassessment within both the Persian literary tradition and the wider Oriental andIslamic literary and cultural context.