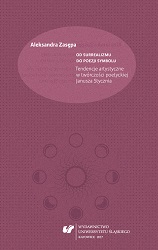 Author(s): Aleksandra Zasępa
Subject(s): Language and Literature Studies, Studies of Literature, Polish Literature, Philology, Theory of Literature
Published by: Wydawnictwo Uniwersytetu Śląskiego
Keywords: Styczeń; Onirism; surrealism; symbolism; symbol; imagination
Summary/Abstract: The present work is devoted to the lyrical artistic activity of Janusz Styczeń, one of the most interesting contemporary poets, whose artistic path (delineated already in the mid 1960s) gradually led from linguistic experiments characteristic for the accomplishments of Tymoteusz Karpowicz, through the poetics of liberated imagination inspired by surrealistic imagery, and finally up to increasing symbolic tendencies, which stemmed from the poet’s sensitivity based on his fascination with the symbol. In this, to some extent, self-contradictory collation of superrealistic imagery (subjected to the freedom of associations, absurdity, dark, oniric images with a whole repertoire of oddities) and symbolic imagination is rooted not only in a specific, individual quality of his lyric poetry, which makes the author of Wieczna noc miłosna simply a poet „detached”, but also its astonishing cohesion. The present book is an attempt at the interpretational conceptualization of Styczeń’s poetry in terms of surrealistic and symbolic connections, whose roots can be foundboth in the conceptions or works of superrealists, as well as in the sphere of the timeless, superindividual ideas. The respective parts of the book encode the links of the artist’s individual imagination with the symbolic meanings and superrealistic images (literary, artistic), pointing out to the artistic tendencies that are the most important for the poetry of Styczeń, and at the same time unfolding the multiplicity of plots and interpretational perspectives. The avant-garde tendencies, which in the light of tenuous superrealistic tropes in Polish literature can be called a returning echo ofsurrealism, have been described by the author in various chapters of the present book. Chapter 1 has been devoted to onirism and imagination, which in the poetry of the author of Rozkosz gotycka are characterized by surrealistic provenance, which is evidenced most of all in the typical for superrealistic tendencies circle of the most representative plots, elements, and associations. In the case of this particular lyrical poetry, their indication becomes confronted with a dream (as the basis source of superrealistic fantasy) which at the same time becomes a point of departure for the typology of motifs related to surrealism discussed in this chapter.An extremely individual creative method of Styczeń is manifested, among others, in the unusual world he portrays, which is a compilation of objects, phenomena, processes, events, and ideas. This world creates for Styczeń’s poems the aura of strange words, obsessively recurring symbols, which aspire to the name of extremely individual symbols, to a large extent borrowed from the modernistic „props room”. The most characteristic key-symbols for this poetry are inspected in the next chapter of the present book. The attempt at reviewing the figures of speech has been broadened with their interpretation, both in terms of their connections and relations to literary-study ideas, as well as in terms of the most important tenets of psychoanalysis and psychocriticism, which treats the symbolic system as a pictorial, enigmatic, and metaphoric portrait of mental reality. Also characteristic in Styczeń’s surreal-symbolic poetic creativity is his turn towards artistic visions and the presence of numerous analogies to iconographic depictions. The juxtaposition of the poetry of the author of Boski paragraf with visual art is contained in the chapter entitled W kręgu malarskiej metafory (Within pictorial metaphor). Here, the intersemiotic space of pictures and words becomes for the author of the present study first of all the point of departure that enables to refer the poetic structure to a specific iconography. The poetry of Janusz Styczeń is considered by many critics as the only conscious continuation of surrealistic program in general, and his poetic tactics – according to some literary researchers – reveals the poet’s wish to make up for the missing link of the Polish superrealistic poetry. The problem of Styczeń’s poetry put against the context of literary fates of Polish surrealistic imagery has been undertaken in the final chapter of the present book, which is a compilation of various research attitudes and the most important interpretational suggestions related to the creative method adopted by the poet. The present book constitutes an attempt at inspecting the poetry of this contemporary poet (situated still somewhere at the periphery of literature) in terms of cognitive paths as well as artistic tendencies employed, which drive, inspire, and determine this captivating lyrical poetry. At the same time, the study proves that over the years that witnessed the publication of subsequent texts and volumes, the poems of Janusz Styczeń have still remained aesthetically consistent, submerged in the oniric world of a dream, full of philosophical and cultural references, stretched out somewhere between visionary metaphorics of superrealism and an symbolic space as an alternative to the world.