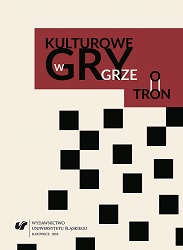 Contributor(s): Beata Gontarz (Editor)
Subject(s): Language studies, Language and Literature Studies, Fine Arts / Performing Arts, Library and Information Science, Applied Linguistics, Studies of Literature, Film / Cinema / Cinematography, Sociology of Art
Published by: Wydawnictwo Uniwersytetu Śląskiego
Keywords: fantasy; destruction of a myth; archetypes; picaresque novel; religion; magic; the Middle Ages; prehistory
Summary/Abstract: The monograph has been written as an effect of the meetings of “Matrix” – Students’ Popular Culture Research Circle at the University of Silesia. The young researchers in the field of popular culture, deriving knowledge from the experts on the subjects they have been studying at university: cultural studies, media studies, literary studies, and history, attempted to look critically at measures adopted by the author of the “Game of Thrones” which resulted in creating the universe that appears to be attractive to a member of contemporary culture. The researchers have shown that Martin reaches for our contemporary judgements about the world and human beings: we live in the state of dispersal, disorder, and the blurring of rules. He seems to accentuate strongly the lack of arche, the loss of foundations, which corresponds with the postmodern time context that the cycle has been created in. The authors of this book, on the one hand, have examined the rules of involving the reader in the well-known fantasy genre, and, on the other hand – of suggesting the clues to help them find novelty, difference, and originality. The title of the monograph seemed natural. Not only as an effective word game referring to the idea of George R. R. Martin: a game (for what? – the authors of the monograph try to answer this question) is introduced by the author to the universe of Westeros. It is also a proposal for a new research method, namely, for indicating new cultural areas of reference used by Martin, such as: chaos juxtaposed with linearity of history, the religious orderliness, and the power of magic, illustrating human fears, feeling of loss, and searching for identity, the deconstruction of archetypal models as well as compositional and feature structures.

The Monster outside and the one within: the departure from the Tolkienesque concept of monstrosity in the books of G.R.R. Martin