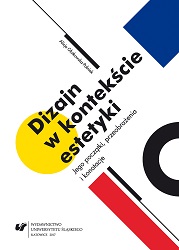 Dizajn w kontekście estetyki. Jego początki, przeobrażenia i konotacje
Design in the Context of Aesthetics. Its Origins, Transformations and Connotations

Author(s): Alicja Głutkowska-Polniak
Subject(s): Social Sciences, Fine Arts / Performing Arts, Sociology, Sociology of Culture, Sociology of the arts, business, education, Sociology of Art
Published by: Wydawnictwo Uniwersytetu Śląskiego
Keywords: design; aesthetic; contemporaneity; culture; art; lifestyle
Summary/Abstract: The term “design”, commonly used today, however ambiguous and multidimensional, cannot be denied cognitive usefulness. Generally understood, design refersto contemporaneity, revealing the dependencies between production, consumption and culture. As a distinguished type of activities and practices, realizing the values of social aesthetic awareness, it is vibrant in today’s world.This book aims at showing the category of design in a broad cultural context, with a focus on the evolution of this notion in the 20th century. An analysis of this phenomenon, rich in multifarious connotations, begins in Europe at the approach of the 20th century, when this discipline, in a way, emerged from the sphere of artistic activity (Bauhaus, De Stijl), and ends in contemporary times. The road leads through issues strictly connected with the development of technology and aesthetics, but exclusively within the aspect of human life and functioning. In fact, design has always been connected with man as a subject (author and recipient) and anobject that the latter has in use. As such, it carries in itself a great wealth of diverse ideologies and socio-cultural values, which it reflects in connection with human life. In this sense, design is also a reflection of a way of this life, particularly in the times of aesthetization of reality.Design, as a close connection between art, technology and life eludes all definitions; it cannot be be unambiguously boiled down to any specific esthetic theories either. Referring to Peter Bürger, it can be assumed that design is art which became so immersed in life practice, that, having lost distance to the latter, it ceased to function stricte as art and became a new area of quest and experiments. Therefore, aesthetics implicite, as seen by Władysław Tatarkiewicz, tranferred into the sphere of design: drawing from the designers’ practices, contained in items/objects/utilitarian products, in critical thought and tastes and fads of a given period, seems to be the most optimal form of an aesthetic analysis of this phenomenon. Such an analysis is a priority of this work, whereas the chronological aspect helps connect design to the (aesthetic) functioning of man starting from from modernist beginnings of the 20th century throughout postwar changes and postmodernist aesthetic relaxing.