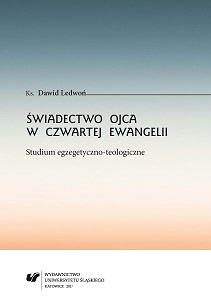 Author(s): Dawid Ledwoń
Subject(s): Christian Theology and Religion, Theology and Religion, Biblical studies
Published by: Wydawnictwo Uniwersytetu Śląskiego
Keywords: The Witness; God Father; The Gospel of Sts. John; biblical theology; works; signs
Summary/Abstract: From among the four canonical Gospels, the Johannine rendering is the one most focused on Jesus’ Father – God. In the Gospel according to John, the basic means of expressing (revealing) the said truth is witness (μαρτυρία) along with, related thereto, the act of bearing witness (μαρτυρέω). The notion of witness contains speaking, arguing for, convincing, and asserting that Jesus was the Son of God sent so that whoever believes in Him shall have eternal life (John 3:15–16).The theme of witness of the Father as a cohesive research subject had gone unnoticed in global biblical studies until the half of the 20th century. Also, it had not been perceived as a crucial element of teaching about God the Father. Only 1950s brought about radical change in biblical theology. What began to be stressed back then was the relationship between Christology, emphasised strongly in the Gospels, and the reflection about presence and the work of the remaining Persons of the Holy Trinity. The Johannine Gospel appears to be an especially valuable subject of research due to the theme of God’s fatherhood – in particular, giving witness to the Son – present therein, which constitutes a structure of the fourth Gospel and remains critical for its interpretation. Another important aspect of the witness indicated in John is: unveiling the internal life of Jesus and the interrelations within the Trinity.This monograph aims at determining features of the witness that God gives about His Son; to subsequently indicate places and manners in which the said witness is actualized in the fourth Gospel, in addition to providing an answer to the question regarding the possibility of the human participation in the witness of the Father and where it eventually finds its fulfillment. The book’s extensive introduction contains a presentation of the current state of research as well as a justification of an assumed research method. A synchronic approach is a basic device of analysing the Gospel according to John in its canonical form. Chapter One of the book contains a study of the witness of the Father in the fourth Gospel against the backdrop of the Old Testament. Two subsequent chapters present a detailed analysis of the pericopes John 5:31–47 and 19:31–37 which follows the same pattern: the text delimitation, the text criticism, the translation and philological remarks, presentation of the text structure, and finally, the analysis thereof in context. The concluding remarks are included in particular summaries. The final, fourth chapter pinpoints, in turn, the places where the witness of the Father occurs in the narratives about Jesus’ resurrection. Due to the extent of research scope into the witness of the Father in John 20 and 21, the translation of the mentioned chapters in their entirety has been abandoned. In this part of the monograph, the analysis concerns the descriptions of the empty tomb and of characters’ reactions and attitudes present in the Gospel narratives; most of all, however, it is focused on the descriptions of the Christophany and Jesus’ speeches. Conclusions of the book present the synthesis of the research findings.