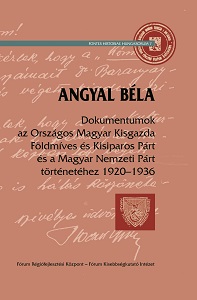 Author(s): Béla Angyal
Subject(s): Politics / Political Sciences, Politics, History, Recent History (1900 till today), Interwar Period (1920 - 1939), Politics of History/Memory, Politics and Identity
Published by: Fórum Kisebbségkutató Intézet
Keywords: documents collections;Hungarian political parties in Slovakia;interwar Czechoslovakia;
Summary/Abstract: For exploring the history of Hungarian parties in Czechoslovakia between the two world wars, it is indispensable to get acquainted with the original sources and documents. After the Second World War, following the measures affecting the Hungarian minority, the archives of these parties were lost or scattered, therefore the search of documents relating to them has been a difficult task for historians. Information on the history of these parties can only be traced out of various domestic and foreign archives and of different types of funds, and by gathering news and reports after reading dozens of contemporary newspapers.In this collection of documents I have included 53 documents on the second strongest party among the Hungarian civic parties in Czechoslovakia between the two world wars: the Provincial Hungarian Smallholder Agrarians’ and Craftsmen’s Party (Hungarian: Országos Magyar Kisgazda Földmíves és Kisiparos Párt), as well as on its successor, the Hungarian National Party (Hungarian: Magyar Nemzeti Párt) established in 1925. This volume is closely linked to my collection of sources published in 2004, entitled Documents on the History of the Provincial Christian Socialist Party 1919–1936 (Hungarian: Dokumentumok az Országos Keresztényszocialista Párt történetéhez 1919–1936), and the book called Interest Protection and Self-organization. Chapters on the History of the Hungarian Political Parties in Czechoslovakia 1918–1938 (Hungarian: Érdekvédelem és önszerveződés. Fejezetek a csehszlovákiai magyar pártpolitika történetéből 1918–1938). The former collection of documents contains sources on the other significant political platform of the period, the Provincial Christian Socialist Party. The present book follows the proven editorial principles of the latter.In the introductory study I briefly summarize the history of the party, present its program and its role in the Hungarian minority politics. I deal more specifically with the party’s election results and the party-related press.While selecting the documents, I sought to publish those introducing the events taking place within the party and the processes going on in domestic politics. The smallholders’ party had not only changed its name over its 16 years of independent operation, but had politicized along various programs and strategies until the summer of 1936 when it merged with the Provincial Christian Socialist Party. In the introductory study, as well as in the comments and notes attached to the documents, I refer to each turning point separately.The documents are presented in a chronological order, marked with Arabic numerals. The serial number is followed by a short regest, which indicates the date and place of origin of the document. In the rest of the regest, the reader is provided with information about the contents of the document without evaluation or classification. I sought to communicate the full text of the sources. Where it was not possible because of the extent of the document or for reasons of substance, I applied partial publication, while indicating the omissions with a square bracket [...]. In case of articles taken over from the press, the text is preceded by the article´s original title. The text of the document is in all cases followed by a mark indicating the location of the document. Then I give the type of the document (clarification, phrasing, copy) and the method of its production (handwritten text, typed, printed text). In case of articles taken over from the press, I refer to the title of the paper, page number, and the author’s name. Each document is followed by a commentary. In some sentences I introduce the document’s author(s), its production and other related documents, as well as the relevant literature.The understanding of the collection’s documents is supported by a wide range of notes and by names register. In addition, the volume is complemented by a rich photographic material aiming to give a well-rounded picture of the era.