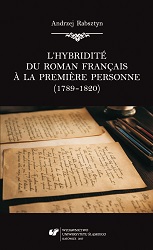 Author(s): Andrzej Rabsztyn
Subject(s): Language and Literature Studies, Literary Texts, Studies of Literature, French Literature, Theory of Literature
Published by: Wydawnictwo Uniwersytetu Śląskiego
Keywords: Eighteenth-century French literature; French First-Person Novel; Hybrid form; Novel in letters; French literature at the turn of the 18th and 19th centuries
Summary/Abstract: The present study proposes a systematic diachronic analysis of the French novel, with the focus on the relations between diverse narrative forms present in it (such as a letter, a diary, and an intimate journal). The main goal of this work is to investigate the hybridity – i.e., the blurring and transcending of the limits of narrative genres – of the novel form, which emerged in consequence of the profound transformation the novel underwent in the 18th century. Notably, this study discusses hybridity in the context of the first person narration which is distinguished by its sentimental, erotic, ironic, and socio-moral character. The phenomenon is particularly apparent in the French narrative prose at the turn of the 18th and 19th centuries, the period of historical and political turbulence. It is then that the French first-person novel takes its hybrid form, which leads to its fragmentariness. As the genre which addresses the reader in the most direct manner, it also aims to make the reader realize that s/hecan become the center of, and the witness to, the most significant historical events, as well as the subject of self-reflection and auto-analysis characteristic for the literary works of the First Romanticism. Furthermore, the present study attempts to systematize and popularize the research on the French and European first-person novel at the turn of the centuries. The methodological basis for this analysis is the aesthetic literary criticism focused on the novel genre. The detailed examination of the first-person novel requires a chronological presentation of the changes the genre underwent in the 18th and 19th centuries on the level of paratext, as well as the accentuation of the relations between various narrative forms (as the reflection of their common use in the given period) in the light of mimetic formalism. In accordance with the concept of genre syncretism, this analysis investigates a number of genres and literary forms (letters, diaries, journals) in one literary work, which can appearin turns, overlap, and permeate one another. The borderlines between these genres and forms are often blurred. In the rich tradition of the French and European novel (e.g. in the works of Lawrence Sterne) one can see the characteristics of hybridity which consists in absorbing allsocial forms of communication. In the novel of the second half of the 18th century, one can see the changes that prognosticate new aesthetic aspirations of Romanticism.The present monograph extends the research on the French first-person novel at the turn of the 18th and 19th centuries which is still referred to as “no man’s land” due to its unexplored, difficult to define, and heterogenous character. In fact, the bibliography of the novel genre in France (A. Martin, V. G. Mylne, R. Frautschi) ends in the year 1800. The global approach to the first-person novel is reflected in research on various types of the novel, such as the epistolary novel, the journal, or the intimate diary. The literary material which is discussed in this work is the result of the social practices in the field of paraliterature (exchange of letters,diary and journal writing), which enriches the project with valuable information on the society and culture of France and Europe. The monograph is then inscribed within the historical, theoretical, and socio-literary research devoted in particular to the 19th century novel, as the hybridity of the French first-person novel between 1789 and 1820 is more than a mere continuation of the tendency from before 1780. The blurring of borderlines between the genres, and the merging of different narrative forms, is, in fact, an indication of new aesthetic aspirations which evolved in Romanticism. The analysis of the hybrid character of the first-person novel is a key to the understanding of the transformations French and European novel underwent after 1820.