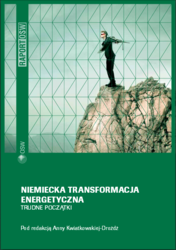 Author(s): Marta Zawilska-Florczuk, Konrad Popławski, Piotr Buras
Contributor(s): Anna Kwiatkowska-Drożdż (Editor)
Subject(s): Politics / Political Sciences, Politics, Economy, Energy and Environmental Studies, Governance, Geopolitics
Published by: OSW Ośrodek Studiów Wschodnich im. Marka Karpia
Keywords: Germany;energy sector; Energiewende;renewable energy sources;
Summary/Abstract: Initiated in May 2011, several months after the Fukushima nuclear disaster, Germany’s energy transformation (Energiewende) has been presented as an irrevocable plan, and – due to the speed of change required – it represents a new quality in Germany’s energy strategy. Its main objectives include: nuclear energy being phased out by 2022, the development of renewable energy sources (OZE), the expansion of transmission networks, the construction of new conventional power plants and an improvement in energy efficiency.The cornerstone of the strategy is the development of renewable energy. Under Germany's amended renewable energy law, the proportion of renewable energy in electricity generation is supposed to increase steadily from the current level of around 20% to approximately 38% in 2020. In 2030, renewable energy is expected to account for 50% of electricity generation. This is expected to increase to 65% in 2040 and to as much as 80% in 2050. // The impact of the Energiewende is not limited to the sphere of energy supplies. In the medium and long term, it will change not only to the way the German economy operates, but also the functioning of German society and the state. Facing difficulties with the expansion of transmission networks, the excessive cost of building wind farms, and problems with the stability of electricity supplies, especially during particularly cold winters, the federal government has so far tended to centralise power and limit the independence of the German federal states with regard to their respective energy policies, justifying this with the need for greater co-ordination. The Energiewende may also become the beginning of a "third industrial revolution", i.e. a transition to a green economy and a society based on sustainable development. This will require a new "social contract" that will redefine the relations between the state, society and the economy. Negotiating such a contract will be one of the greatest challenges for German policy in the coming years.