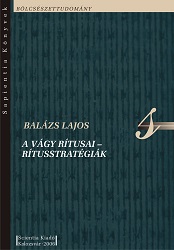 Author(s): Lajos Balázs
Subject(s): Anthropology, Social Sciences, Sociology
Published by: Scientia
Keywords: rites;wishes;birth;marriage;death;passage; life course transition
Summary/Abstract: The psychic background of customs related to birth, marriage, and death attempts to approach rites of passage from a different point of view. As the title suggests, changes in social array cannot be interpreted as mere social phenomena. Life course transition points such as birth, marriage or death are preceded by relatively slow biological, psychological and spiritual processes, as well as by the process of social puberty. The writing posits that theories which regard customs only as changes in social array narrow or even exclude what latently influences the individual's everyday life. Earlier research on customs, including Arnold van Gennep's theory on rites, did not focus on the psychological, spiritual background of the transition points of human life, on the psychological motivations of rites and on their real humaneness. What these works concentrated on was mainly the organization, the "screen-script" of customs, mostly the visible aspects. As Zoltan Fejos points out, Gennep "lays stress on the changes in people's social array, thus he focuses on passage". Based on Gennep's theory on rites, our work makes an attempt to provide a more exhaustive analysis of rites, trying to interpret the antecedents (which are much earlier and more complex than they are presented in Gennep's theory), the later consequences and the sub-rites that can be identified within customs and rites of passage. Rites of passage are highlighted upon from the standpoint of desire and hope - the desire for leaving an old status and the hope to successfully pass and integrate into another. The book does not reject earlier classifications, but it provides an approach which tries to find universally human motivations that are underlying the socially, culturally and anthropologically based functionality of rites of passage. After a parallel and alternative presentation and analysis of birth, marriage and death, specific types of rites are identified and separated, which accompany the great periods of life course transitions such as rites of approach, bewitchment, release, purification or desire-breaking rites, etc. The book deals with the specific language and instruments of traditional customs - rites, rituals, symbols, signs with symbolic interpretations, superstitions - all being regarded as carriers of desire and hope, which, by means of their content and formal expression often bind the traditional rites of passage of Csikszentdomokos with the world, and, at the same time, separate them from the world, as they are local and specific - thus proving not only the universal cultural continuity of a community, but also its adaptation, individuality, its specific view on world and life. The author does not set as target to answer questions like who the customs, the rites or the superstitions of a Szeklo-Hungarian were borrowed from, who they have been transmitted to or who this culture has had influence on, but it tries to highlight the way the community experiences the great life course transition points with reflexes that comprise both universally human thoughts, sentiments, actions and local peculiarities. In other words, it looks for contact-points between universal, mythical and ceremonial systems, ranges of sentiments and symbols on the one hand; on the other hand, it tries to identify analogies between image and meanings on a microcosmic level. The writing also focuses on parallelisms and (sometimes shocking) similarities, which are pointed out in the footnotes.