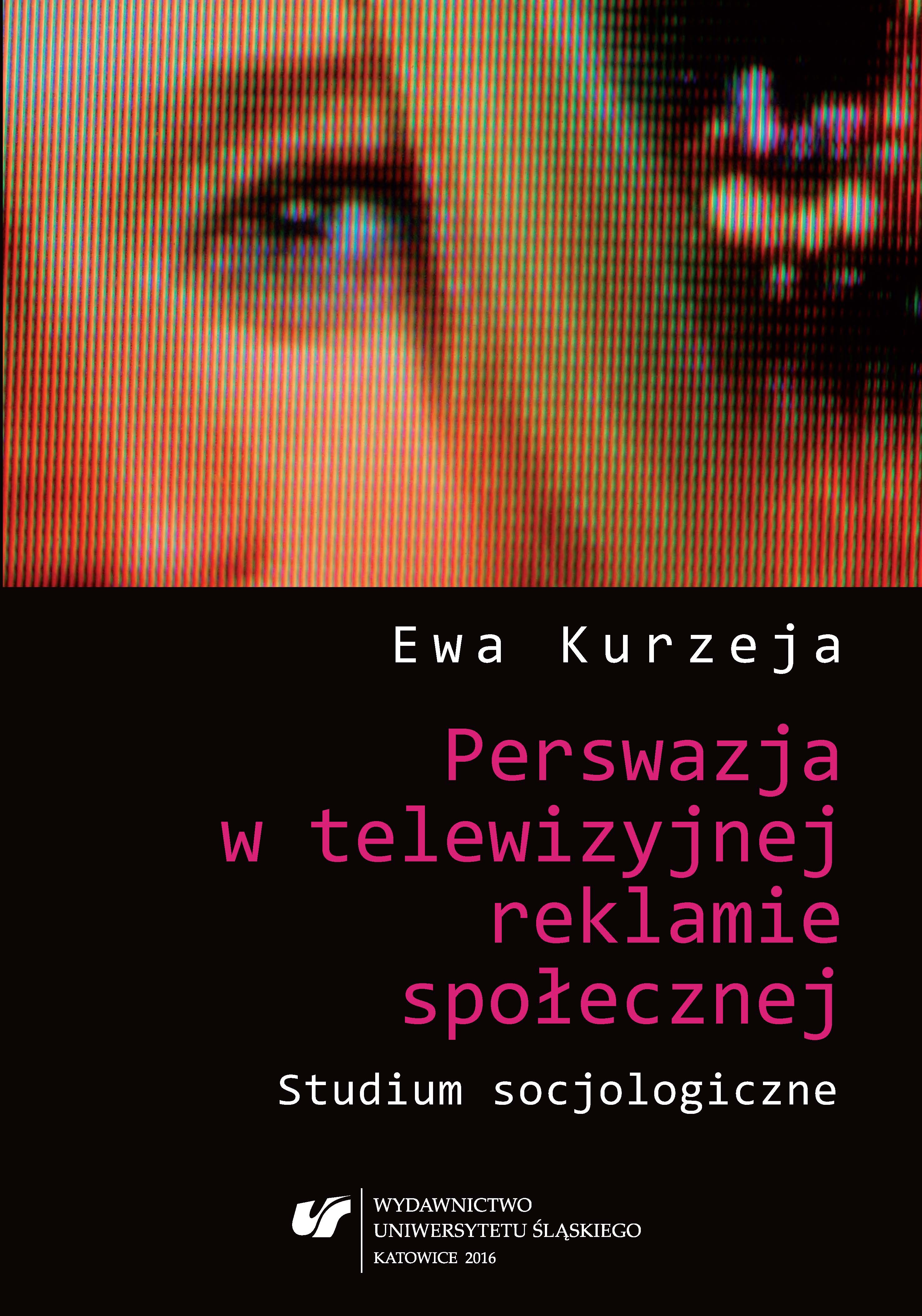 Author(s): Ewa Kurzeja
Subject(s): Psychology, Visual Arts, Cultural Anthropology / Ethnology, Sociology of Culture, Sociology of Art
Published by: Wydawnictwo Uniwersytetu Śląskiego
Keywords: Persuasion; advertisement; television; sociology; marketing
Summary/Abstract: The book is devoted to the phenomenon of persuasiveness in television public service advertisements. The said type of advertisements is aimed at prompting particular socially desirable attitudes or persuading members of the audience to cease their socially undesirable behaviour. Therefore, such campaigns serve to transform currently existing reality and disseminate knowledge related to social phenomena and to engage audience in social matters.The monograph is composed of seven chapters, complemented with introduction and summarising section, along with an extensive bibliography, and the lists of tables and figures appearing therein. First four chapters, written on the basis of rich literature on the subject in question, are of theoretical character. In a form of an outline, they present the history of advertising and its defining features, fundamental issues involving contemporary advertisements and their role in shaping public opinion; but also important questions falling into the scope of public service marketing, its origin, devices, and functions performed by it. Another discussed issue are the methods of exerting influence by mean of a message contained in an advertisement, which are synonymous with persuasion and targeted at changing the members of the audience’s attitudes. The chapter concluding this part of the publication deals with persuasion in public service advertisements directly. Polish public service advertisements, characterised according to their problematic, are presented in the said chapter, along with the discussion of the means of persuasion used in them, particularly: the formal concept, auditory, verbal and visual layers, and a type of protagonists featured.Part two of the book, which is empirically oriented, presents the author’s own research relating to the public service advertisements broadcasted in Poland in the years 2005–2010. The proper research sample (n = 99) was obtained on the basis of the probabilistic random sampling method. The formulated research problem is the role of public service advertisements in the process of shaping social awareness as well as the members of the audience’s attitudes. What was set as the research aim, was the analysis of particular advertisements’ contents and the comparative analysis thereof. Chapter five discusses the research method used (content analysis), the technique devised by the author (categorization key), and the implemented methods of analysis and interpretation of the obtained data. Chapter six, in turn, presents a model analysis of the phenomenon of persuasion in television public service advertising. Additionally, it gives a demonstration of research material collected in the course of the study, subsequently ordered in accordance with suitable criteria and complemented with commentaries constituting an attempt at comprehensive overview regarding the collected data. The final chapter contains both the analysis and the interpretation of the conducted research. By means of categorization keys, the chapter provides a description of distinctive themes present in the analysed advertisements, as well as the issues addressed in them. The advertising spots were classified with reference to their length, the period in which the campaigns containing them were conducted, and the territorial scope of their broadcasting (all-Poland, regional, local). What is more, the analysis of the advertising spots’ contents wasperformed, taking into account: the addressee thereof, the means of expression used, and a type of protagonist featured. Crucial part of the chapter is a detailed discussion of particularmeans of persuasion devised in the advertising spots under analysis. The presented researchresults were supplemented with relevant commentaries, indicating the weighty aspects of agiven question along with the presentation of selected examples and the author’s own interpretation of the observed interrelations. In concluding remarks, the research results and the their analysis were summarised and confronted with the initially forwarded hypotheses.