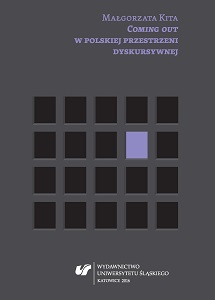 Author(s): Małgorzata Kita
Subject(s): Anthropology, Social Sciences, Language and Literature Studies, Sociology
Published by: Wydawnictwo Uniwersytetu Śląskiego
Keywords: coming out; LGBT discourse; cultural linguistics; practice “wychodzenia z szafy”; species of speech
Summary/Abstract: Originating in the 1960s and in Poland developing since the turn of the 21st century, the LGBT discourse – liberationist, identity-oriented, theoretical and artistic – can be expected to draw the attention of scholars. Indeed, it has become an area of interest for many disciplines. It has been explored by philosophers representing various paradigms, psychologists and sociologists and continues to draw the attention of anthropologists and cultural, literary and film studies researchers. It is also present in linguistic investigations andreflection.In Poland, the research has so far focused mostly on the problem of names given to LGBT individuals. This is a highly sensitive area of giving linguistic shape to the perception and categorisation of persons whose psychosexual identity is different than the commonly accepted one – both in the so called general language and in the insiders’ language, that is as practiced by the LGBT community.The adopted approach looks into the linguistic practices of non-heterosexual persons. The main focus is on a genre of speech whose performative nature creates a new reality that goes well beyond the language, both on the individual and on the social scale – coming out, a public (albeit to a different extent) selfdeclaration meaning ‘I am an LGBT person’.This communicative act has a long history, although its present name is relatively new and dates back to the 1960s. In Poland, it appeared in the public discourse in the 1990s and has quickly become adapted – together with its English name, which has been transferred into Polish.Taking cultural linguistics as its theoretical basis, this book discusses a genre which is (relatively) new to Polish genology: its semantics and pragmatics and the accompanying struggles to find a name or label for it (or, to use a newmedia phrase, to tag it). The name in this case is particularly important as it documents the evolution in meaning and carries a substantial emotional load towards the communicative event it refers to.Although the book’s primary concern is the Polish practice of ‘coming out of the closet’, reference is also made to the acts of coming out taking place outside Poland and the world of fiction, which serves as a source of representation of the LGBT issue and an illustration of the phenomena discussed. This broader context provides the essential background and a base of data. Coming out is regarded here as a beyond-the-borders genre of speech (not universal, though, as non-heteronormativity is closely connected with specific cultures); still, the focus is primarily on its linguistic description in the Polish discourse space.