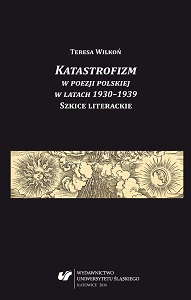 Author(s): Teresa Wilkoń
Subject(s): Language and Literature Studies, Literary Texts, Poetry, Studies of Literature, Polish Literature, Philology
Published by: Wydawnictwo Uniwersytetu Śląskiego
Keywords: katastrofizm w poezji; Dwudziestolecie międzywojenne; grupy poetyckie Dwudziestolecia; Żagary; grupa „Wołyń”; „Kwadryga”; „Trzeci wyraz”; pokolenie 1910
Summary/Abstract: Poetic catastrophism constitutes only a part of its all literary genres. Apart from it, numerous works emerged in Poland in the first half of the twentieth century that distinguished among prosaic catastrophism (e.g. in the short stories by Bruno Schulz and Jerzy Andrzejewski), dramatic catastrophism (e.g. in Szewcy [The Shoemakers], by Stanisław Ignacy Witkiewicz), catastrophism in essay writing (also in Witkiewicz). Each of these genres of Polish literature was characterized by specific features, standards, and genesis. The poetic catastrophism, which is elaborated on in the present book, had many individual, unique features, and at the same time as many artistic initiations. It identified motifs, plots, and toposes, keeping away from fabular and action narratives. It definitely rejected the schemes of popular prose, surpassing it in terms of its artistic and semantic creativity. It can be argued that the poetic catastrophism played a similar role as catastrophism in art, namely, it was heading towards high style. Gradually, it was becoming not only a literary or artistic theme, but also an artistic movement supported by philosophy, historiosophy, ethics, as well as the theory of culture and civilization. It was also popularized by an enthusiastic response it received from publicists and journalists, from both the press and the radio. Catastrophic motifs developed, in a way, together with film, ambitious painting, and graphics. Suffice it to mention Guernica, the dramatic painting by Pablo Picasso.For a long time, historical literary studies on catastrophism had treated it merely as a theme, motif and plot, not as a philosophical and artistic phenomenon. This was the case up to the year 1930, when catastrophism spread as a movement, and up to the time when this phenomenon gained recognition not only among Vilnian poets, but also among other literary groups and independent artist communities. The periods preceding the catastrophism of the thirties included themes that contributed to the romantic pessimism, or, later, to the Decadent movement and the pessimism of Młoda Polska (“Young Poland”) formation. In the thirties, a broad and strong catastrophic movement started to develop, which heavily influenced Polish culture and philosophy. Therefore, for the author of the present study, it seemed particularly interesting to discuss at least some phenomena and motives for the development of catastrophism in Poland, which at that time was one of the most endangered countries, not only in Europe.Catastrophic, and catastrophizing, poets were acutely aware of this state of affairs. It became apparent in the works of the poets of the 1910 generation. In the first part of the literary sketches offered here, the author has focused on the phenomenon of catastrophism in poetry, and also discussed the problem of literary generation and the classification into literary groups, taking into account individual poets, not affiliated with any particular poetic formations. Also, she has made an attempt at standardizing terminology with referenceto all literary groups of the 1910 generation, and specifically to the so-called Vilnian catastrophism (the Żagary group). Another issue that has become important for the author is the problem of dispersed motifs and toposes, as well as catastrophic symbols, such as military and revolutionary catastrophes, prophetic catastrophes, catastrophes in the sphere of values, or religious catastrophes. Moreover, in this part of the book, the author has discussed the works of the poets of the “Wołyń” group (Wacław Iwaniuk, Zygmunt Jan Rumel, Zuzanna Ginczanka, Jan Śpiewak). The second part of the present sketches involves analyses and interpretations of poems written by eminent poets whose works clearly fit into the movement of catastrophic poetry, despite their belonging to different categories and poetic formations: Władysław Sebyła, Józef Czechowicz, Mieczysław Jastrun, Jerzy Zagórski, and Konstanty Ildefons Gałczyński. Special emphasis has been placed upon catastrophic and philosophical motifs in the poetry of Czesław Miłosz.The works of the poets of the 1930s featured in the present work demonstrated the variation of experiences, reflections, attitudes towards the world and people, acute states of consciousness and perception. All these factors had tremendous impact on the substance and structure of poetry, and hence on the type of utterance for which visions and mobility of thinking and subconscious associations belong to the most important features of poetry.