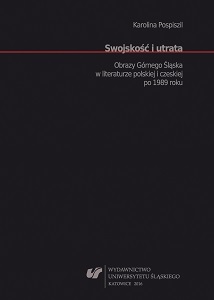 Author(s): Karolina Pospiszil
Subject(s): Social Sciences, Language and Literature Studies, Geography, Regional studies, Studies of Literature, Philology
Published by: Wydawnictwo Uniwersytetu Śląskiego
Keywords: Górny Śląsk; localism; literature; spatial turn; geopoetics; geocriticism
Summary/Abstract: The aim of the book is to represent and to analyze the most important elements of literary depictions of Upper Silesia in the latest Polish and Czech literature. The author applies the methodology connected with special turn and tries to represent the fullest analysis of the representations of the region in question. She analyses a several dozens of literary texts and texts of culture (in broad understanding of this term) trying to answer, among others, the following questions: how Upper Silesia is represented in literature, why was it so late that somebody got interested in the region and whether there is any Silesian model of writing.The book consists of three parts. The first of them is devoted to spatial turn and the possibilities that it opens for literary studies. The most important trends in contemporary thinking about space are depicted, including those which had anticipated the special turn. The author concentrates mostly on those methodologies that she calls “geo-tools”, that is: geopoetics (in its specifically Polish understanding), literary geography and a few of its variants and on geocriticism. An important trend in this part of reflection upon space and its connections with culture is new regionalism. The author, while discussing this important for literature concerning Silesia phenomenon, attempts to represent the most important definitions of region and regionalism as well as to point toward a few research possibilities opened by new regionalism. The second part of the dissertation concentrates on “imagined space-time continua” of Silesia. The author depicts the borders of Silesia and its parts on the basis of several historical and geographic publications, proceeding toward the 20th-century imaginations of Silesia depicted not only on the basis of literary texts. The third part is devoted mostly to literary texts in Polish and Czech and the representations of Upper Silesia which are given in this literature. According to the author, the literary images of Upper Silesia are fragmentary and incomplete and most of them concentrates on a few central categories: home/familiarity (borderland, multiculturality, multilingualism, roots, the feeling of being at home), death/loss (language, memory, relatives, identity, “the old Silesia”, greenness (greenness in the city, parks, forests, agriculture) and blackness (industry, cities, pollution, poisoning, mourning).