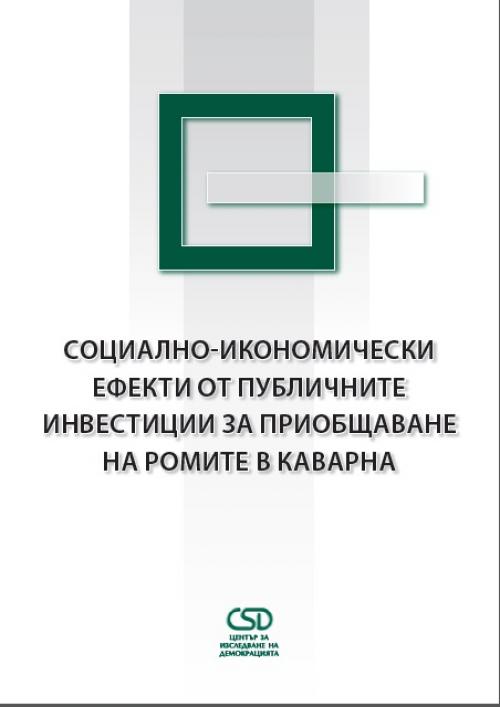 Author(s): Yva Alexandrova, Slavyanka Ivanova, Anna Ivanova
Subject(s): Politics / Political Sciences, Politics, Social Sciences, Economy, National Economy, Civil Society, Sociology, Economic policy, Applied Sociology, Evaluation research, Social development, Policy, planning, forecast and speculation, Economic development, Inter-Ethnic Relations, Public Finances, Ethnic Minorities Studies, Social Norms / Social Control, Sociology of Politics, Socio-Economic Research
Published by: Център за изследване на демокрацията
Summary/Abstract: The aim of the current report is to provide new data and insight on the social and economic effects of public investments in Roma communities from a human development perspective. Its objective is to establish the effects of a wide range of public investments made by Kavarna municipality in the mostly-Roma neighbourhood of Hadji Dimitar, between 2004 and 2014. The investment covered areas such as housing and infrastructure, healthcare, employment, income, poverty and social exclusion, justice and crime, and political participation. It reviews a range of indicators with the aim of establishing the effects of these investments on the social and economic development of the neighbourhood and its residents, both Roma and non-Roma. It also looks beyond the neighbourhood to provide a comparative perspective on a national level. The data presented here is derived from a variety of sources and covers a range of indicators. Every effort has been made to ensure the use of similar indicators and definitions as previous household surveys, notably the UNDP/FRA study, and the NSI, however, the results are not directly comparable due to the difference in survey methodologies, samples and scope. The data presented should be taken as an indication of trends and tendencies. The lack of concrete data on the initial investments, the inputs and relevant baseline indicators has also challenged the quantifying of the contribution of individual public investments. Different investments have had different impact on the development of the neighbourhood and reducing the distances with the Bulgarian residents. This impact has been established by looking at the results obtained from a specialised household survey conducted among 300 Roma and non-Roma households in the Hadji Dimitar quarter of Kavarna in 2015. The relevance and impact of these changes is analysed through comparison with the national averages for the whole population and the averages for Roma nationally. It is also measured against the investments to establish a positive correlation between the effect and the investment where such data exists.