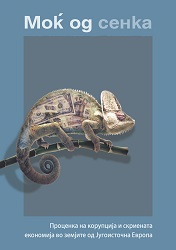 Contributor(s): Ognian Shentov (Editor), Ruslan Stefanov (Editor), Boyko Todorov (Editor)
Subject(s): Politics / Political Sciences, Politics, Social Sciences, Economy, Law, Constitution, Jurisprudence, Criminal Law, Sociology, Economic policy, Security and defense, Applied Sociology, Evaluation research, Criminology, Studies in violence and power, Victimology, Economic development, Sociology of Politics, Socio-Economic Research
Published by: Център за изследване на демокрацията
Summary/Abstract: The current report, prepared by the Southeast European Leadership for Development and Integrity (SELDI) — the largest indigenous good governance initiative in SEE — makes an important contribution to the regional approach to anticorruption. It provides a civil society view of the state of corruption and comes in the wake of the 2014 SELDI comprehensive assessment of the various aspects of the legal and institutional anticorruption environments of nine SEE countries. In 2016, SELDI followed up on these assessments with an update of corruption monitoring and a special focus on state capture in the energy sector and the corruption–hidden economy nexus. The report underscores the need for broader political action for reform, which seems blocked or narrowing across the region. Inside pressure for such action has been suffocated by economic necessity and/or ethnic divisions, and the ossification of political and economic establishments. Outside pressure, delivered mostly by the European Union has been seen as wanting in relation to the size of the problems in the past couple of years due to a succession of internal and external crises. The authors underline that in none of the countries in the region has there been a clear sustained policy breakthrough in anticorruption though efforts to deliver technical solutions and to improve the functioning of the law enforcement institutions, mostly with support from the EU, have continued and even intensified in some cases. This has led to further slow decline in administrative corruption levels but at the expense of waning public support for reforms and of declining trust in national and European institutions.