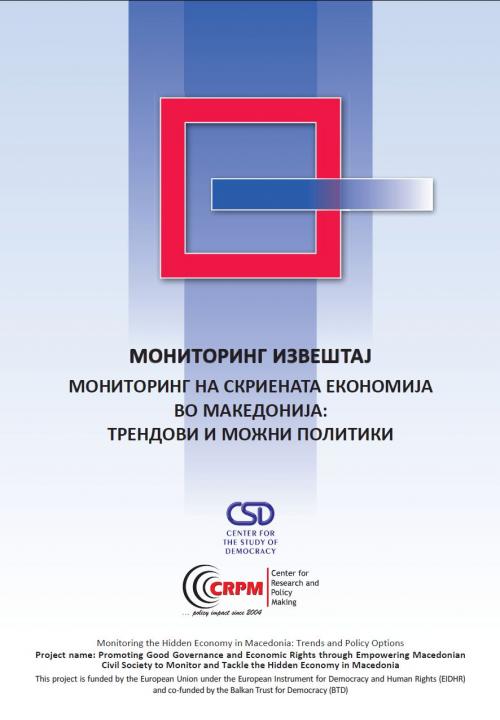 Author(s): Ana Mickovska-Raleva, Emil Shurkov
Contributor(s): Ruslan Stefanov (Editor), Todor Yalamov (Editor), Daniela Mineva (Editor)
Subject(s): Politics / Political Sciences, Politics, Social Sciences, Economy, Law, Constitution, Jurisprudence, National Economy, Criminal Law, Sociology, Economic policy, Applied Sociology, Evaluation research, Economic development, Law on Economics, Socio-Economic Research
Published by: Център за изследване на демокрацията
Summary/Abstract: Macedonia features in many discussions as a country with high hidden economy. The European Commission has repeatedly voiced its concerns in its regular country reports about the size and proliferation of hidden economy practices. Hidden employment or undeclared work in Macedonia is of particular concern to the authorities, provided the very high and stubborn levels of official unemployment and low employment levels. However, most studies and research on the matter involve a high level of ambiguity, as they refer to specific narrow outcomes of the hidden economy, usually towards a specific point in time, with dynamics being difficult to trace. The current report, prepared jointly by the Center for the Study of Democracy (CSD) and the Center for Research and Policy Making (CRPM), Macedonia proposes a methodology that would allow the tracing of the dynamics of the hidden economy and its components (e.g. hidden turnover, hidden employment, etc.) over time. This would make possible for the Macedonian government and its European partners to follow the impact and assess the effectiveness of their policies for tackling the hidden economy. Estimates suggest that the hidden economy size in Macedonia ranges from 24% to 47% of its GDP according to different measurement methods. The current report indicates that the percentage of hidden salaries remains the most acute concern, with the employment income of some 40% of Macedonian employees being at least partially undeclared. Moreover, 7% of all Macedonian employees work without a contract, and are not being paid any social security contributions whatsoever. The interviewed business representatives confirmed wide scale violations of the Labour Code. Over half of those respondents claimed that signing contracts with ‘hidden clauses’ (not accounting for the full remuneration paid out) were commonplace in their sector. Moreover, large-scale tax evasion seems to continue to pose a serious problem for the Macedonian economy and social system as the government tries to adjust them in order to be compatible with the principles of the market economy without imposing too extensive erosion of the social fabric and the existing social benefits. Tax avoidance is especially widespread among the poorest members of the society, which makes the underprivileged especially vulnerable as they may find themselves being criminally prosecuted for unpaid taxes or charged with paying large penalties. VAT returns are provided back to companies with significant time lags and represent additional burden for companies which are part of the formal economy. The issuance of cash register receipts also remains an issue, as only less than a half of the respondents claimed that they always received receipts when buying groceries. The situation is similar with the purchase of services.