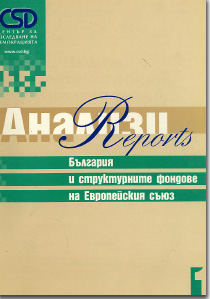 Author(s): Author Not Specified
Subject(s): Politics / Political Sciences, Politics, Social Sciences, Economy, Law, Constitution, Jurisprudence, National Economy, Sociology, Economic policy, Applied Sociology, Evaluation research, Economic development, EU-Accession / EU-DEvelopment, Financial Markets, Public Finances, Sociology of Politics, Socio-Economic Research
Published by: Център за изследване на демокрацията
Summary/Abstract: Bulgaria's accession to the European Union is the foremost strategic objective of the country. This goal both serves the national interest of the establishment of a developed, democratic state and coincides with Bulgaria's readiness to actively participate in the realization of a united Europe. The conclusions of the European Council in December 1997 in Luxembourg opened the way for the active involvement of the 10 countries of Central and Eastern Europe in the preparations for their accession to the EU. It should be noted that the inclusion of Bulgaria in the next enlargement of the EU is an expression of the highly positive assessment of the democratic processes taking place in the country. At the same time, these conclusions specify requirements which need to be fulfilled by Bulgaria as a condition for Bulgaria's accession to the EU. Further, meeting the second and the third group of the Copenhagen criteria requires the complete restructuring of the national economy, the construction of modern infrastructures, the introduction of competitive principles of fair competition and increased social activities with the goal of accession to the policies and the principles of the EU. The present report examines the preparation of Bulgaria for future participation in the structural policies of the EU with the purpose of achieving economic and social harmonization on the basis of the introduction of principles of regional and social policy and the development of infrastructures in the area of transport and telecommunications. Structural funds are among the instruments used to achieve the aims of economic and social harmonization, and thus the preparation for their most effective and efficient use during the pre-accession period is very important. Within this context, the report examines the necessary organizational, administrative, legal and financial measures which must be undertaken in the pursuit of successful future participation in the structural funds of the EU.