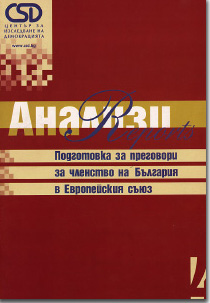 Author(s): Author Not Specified
Subject(s): Politics / Political Sciences, Politics, Social Sciences, Sociology, Applied Sociology, Evaluation research, EU-Accession / EU-DEvelopment, Sociology of Politics
Published by: Център за изследване на демокрацията
Summary/Abstract: The extraordinary dynamics of the process of European integration in the second half of the Nineties has brought forward the need for numerous adjustments, different in depth and in scope, in the associated Central and Eastern European Countries (CEECs) having applied for membership of the European Union. For some countries these processes have developed more rapidly than expected and the adjustments in question have been more or less prom-pted by the aspiration not to lag behind in the overall process of approximation of-Central and Eastern Europe to the EU. The environment is dynamic: the process of integration develops in parallel to, and sometimes even coincides with, the process of political and economic transformation typical of the transition to a democratic society with a functioning market economy. Thus, in the desire to reach as soon as possible the goal - full membership of the Union -it is particularly difficult, but also very important, to bear in mind the useful lessons of the past and the experience gained over previous EU enlargements. The purpose of this paper is to draw attention to some typical challenges relating to the negotiations for EU membership, both in the short and in the medium term perspective. This could be a contribution to the development of the various elements of Bulgaria's preparation for accession negotiations. Emphasis is laid on the model of negotiations, on the various underlying principles, on the indispensable preparation for their conducting, on some organisational and other aspects of their successful development. In this respect, significant reflection is devoted to the lessons to be drawn from the fourth enlargement of the Union. The negotiations for accession to the European Union will take place in a given context which would undoubtedly influence their dynamics and predetermine their successful completion. The context will have both external and internal dimensions, the first connected with the changes in and the readiness of the European Union itself, and the second with the preparation of the candidate country concerned. For the purposes of this paper, attention is mainly drawn to the internal adjustments needed by CEECs, rather than on the processes within the Union which have already been discussed in numerous publications. The historical lessons, the theoretical and practical background described in the first part of the paper and the recommendations on Bulgaria's preparation in the second part are based on an analysis of existing studies, monographs, documents and materials devoted to these problems, as well as on some practical observations arrived at in the course of this process. The clear prospect of opening accession negotiations with Bulgaria in the foreseeable future makes it particularly necessary to refine the overall preparation of the country in order to ensure the indispensable conditions for the conduct of the negotiations. Thus, the conclusions offered below should be regarded as practical recommendations for a more successful preparation of Bulgaria for membership of the Union. The collected material could also be used as reference for some typical problems and for the approaches used to solve them.