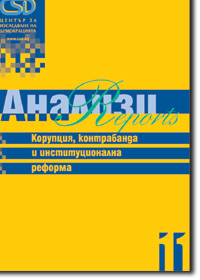 Author(s): Author Not Specified
Subject(s): Politics / Political Sciences, Politics, Social Sciences, Economy, Law, Constitution, Jurisprudence, Criminal Law, Law and Transitional Justice, Governance, Sociology, Economic policy, International relations/trade, Security and defense, Applied Sociology, Evaluation research, Criminology, Studies in violence and power, Substance abuse and addiction, Penology, Victimology, Economic development, Penal Policy, Sociology of Politics
Published by: Център за изследване на демокрацията
Summary/Abstract: The present report summarizes researches and discussions conducted by members of the expert group within the framework of the Bulgarian anti-corruption initiative Coalition 2000 established in 1997. The report is dedicated to one of the most serious problems of the Bulgarian transition towards market economy, stable democratic institutions and legal state. The exploding growth of trans-border crime during the last 12 years has led to the emergence of criminal infrastructure, developed and maintained by criminal groups and semi-legal "power groups," which have appeared in the mentioned period. The trans-border crime in Bulgaria is a part of the new network of international organized crime, which was established after the end of the Cold War and which is closely connected to the regional channels of smuggling and trafficking. Smuggling (including drug smuggling) and trafficking are in particular the main sources of income for organized crime in the country. It is impossible to successfully fight the trans-border crime in the country without a determined effort to counter systemic corruption within the law-enforcing and law-protecting institutions. Enormous part of the criminal acts and irregularities concerning import and export of goods, drugs and weapons, as well as illegal trafficking of human beings, is conducted through unlawful cooperation with customs officers, employees of the National Border Police Service and other state institutions, responsible for border control. Corruption networks are part of the systemic smuggling or of the so-called smuggling channels, and the funds for bribing state employees represent "production costs" for organizers of smuggling. Without doubt, it is difficult to present an accurate assessment of the discussed problems, due to the lack of information about the exact parameters of smuggling, in particular of the drug smuggling, and about the real scale of corrupt practices. Hence the huge importance of indirect indicators like marketing researches in regard with the presence of particular goods on the market, and methods for comparison of such data with official customs statistics for import and exports of the same goods. Apart from these methods, of particular importance is the role of export analyses, reporting on informal "price-lists" of corrupt services, as well as of the scope and value of the realized smuggling deals and operations.